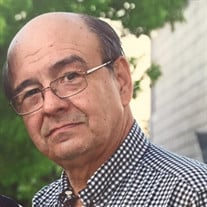 Guillermo Berumen de los Santos was called to be with the Lord the night of Thursday, August 20, 2015. Guillermo—or as most knew him, Bill—was born in Monclova, Coahuila, Mexico on January 16, 1952. His parents were Ezequiel and Nora Berumen. The family later moved to Monterrey, Nuevo Leon, where Guillermo spent his childhood and later obtained his Bachelor of Science degree as an Electrical Mechanical Engineer from Nuevo León State University. In Monterrey on June 8, 1985, he married his wife Dolores. They were married for thirty years.

Bill is survived by his wife, Dolores; his four children, Sarah (who is married to Chadwick McCune), Abraham, Rebecca, and Isaac; and his two grandchildren, Samuel and Raquel, son and daughter of Sarah and Chad.

Guillermo leaves behind a great legacy. He would have described himself first and foremost as a believer, because he had accepted Jesus Christ into his heart and was a man deeply committed to his faith. He always quoted scripture to his children, finding ways to apply the truth of the Word to their everyday lives. He was passionate about his family and put great effort into spending as much time together as possible. He loved the open road, and as far back as his children can remember, there was a road trip for the family to embark on. He loved to discover new cities, nature, and spend quality time together with family. Guillermo was always reminding his children that if they worked hard enough, they could go wherever and be whatever they desired, so long as it glorified the Lord. He would come home from the many family trips and save all the pictures he had taken, posting a date on each one. He would then print them all and add another album to his “picture time line.” He loved capturing every moment he spent with loved ones, later being able to look back on those precious memories.

Besides being passionate about his family and faith, Guillermo was a tremendously hard worker. After work he would come home to start his “second job”—mowing the lawn, taking care of the plants, working in his wood shop, fixing anything that was wrong with the family vehicles or the house. If there was ever a time for relaxing, he was reading or listening to sermons while taking notes. His mind was always working. On his night stand, he left behind sermons notes that he was taking and a list of books that were next on his reading list. He was always learning.

In July of this year, Guillermo had encouraged his family to take a trip to Monterrey, Mexico for a family reunion, where his surviving mother, Nora, and his siblings and their families still reside. Chad and Sarah and their two children also made the trip from Michigan. There were dinner parties, birthday parties, a raffle night, laughter, and many wonderful memories made. Guillermo was happiest when he was surrounded by his family, with his beloved wife by his side. No one could have known that he would be called home just a month later. That trip, surrounded by the people he loved most in this world, would be the last, greatest gift his family could give him.

Although his death was completely unexpected, his family is comforted knowing that it was part of the Lord’s perfect plan. Because of Christ’s redeeming blood, those that believe in Him will see him again in Heaven. The family rejoices and is thankful that the Lord let Guillermo be on this earth for the last 63 years, and that it pleased the Lord to save him. He was a great husband, father, grandfather, son, and brother. He leaves behind a Christ-honoring legacy and will always be remembered with love and affection.