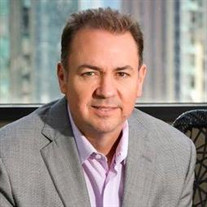 Gregory Brian Staley died on February 16, 2020 in Denver, CO at the age of 59 after a short battle with brain cancer. Greg was known as the “gentle giant,” “the big guy with the little dog,” friend and mentor to many, loving husband and father. He fed countless friends and family using his culinary skills and master grilling.

Greg was born in Kansas City, MO to John and Betty (Chris) Staley. He moved with his family to Phoenix, AZ as a young child. He attended Cactus Wren Elementary School and was active in Boy Scouts. Greg hiked the Grand Canyon three times with the Scouts and his dad by his side. Greg spent his childhood surrounded by friends in a tight-knit neighborhood, where pool parties and barbeques were common. Greg attended Apollo High School in Glendale, AZ. He began his career in the hospitality industry as a teenager, working his way up from busser to bartender at Black Angus restaurant. He then attended Northern Arizona University, where lifelong friendships were established. He earned a Bachelor of Science degree in Journalism-Public Relations. Immediately after college, he returned to hospitality, working his way into management at The Pointe Resorts.

He met his wife of 24 years, Cauleen (Smith) Staley at The Pointe Hilton at Squaw Peak, where they both worked. Greg and Cauleen were married in 1995 in Cauleen’s hometown of Lancaster, PA. As Greg held management positions at a number of restaurants, hotels, and resorts, he and Cauleen made their home in several cities around the U.S. including Flagstaff, AZ; Salt Lake City, UT; Orwigsburg, PA; Christiansburg, VA, and Chicago, IL. In 2004, Greg accepted a job at Destination Hotels in Denver, CO. The Staleys moved to Highlands Ranch, CO. This is where their beloved Yorkie, Martini entered the picture. Although Martini only weighed 5 pounds, she captured the big heart of this 6’ 6” man. Their family grew as son Connor was born in 2008 and Cameron in 2010. Greg loved being a father. He took the boys camping, taught them to ski, and like his father before him, was active in their Cub Scout troops. Greg’s wife and sons were his pride and joy. The friends Greg and Cauleen made throughout their marriage have blessed their family beyond words.

At the time of his death, Greg was the Director of Hospitality at Ameristar Casino Resort Spa in Black Hawk, CO. He loved his job and was blessed to work with an amazing group of people. He was a devout Catholic, an active member of St Mark’s parish and a 4th degree knight with the Knights of Columbus. The faith community at St Mark has been a great support to Greg and his family through the years.

Greg is survived by his wife, Cauleen; sons Connor, and Cameron; sister Julie (Tom) Rodriguez; brother Scott Staley; sisters in law Melissa Smith, and Alisha Heller; father in law Barney Smith; and nephew, Michael Rodriguez. He was preceded in death by father, John Staley; mother, Betty (Chris) Staley; and mother in law, Rosalie Smith. Beloved dog, Martini also preceded him in death. Greg leaves behind many beloved cousins and Uncle Paul Staley. Services will be held at St. Mark’s Catholic Church in Highlands Ranch, CO with Rosary and vigil Sun. Feb 23 at 6:30pm, and Funeral Mass Mon. Feb. 24 at 10am. A celebration of life will be held in Phoenix, AZ at a future date. In lieu of flowers please make donations to Denver Hospice or the Gray Matters Foundation.
To order memorial trees or send flowers to the family in memory of Gregory Brian Staley, please visit our flower store.