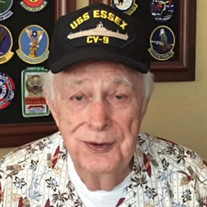 Gilford Glenn Ehler, age 88, passed away peacefully, after a brief battle with Leukemia, on Monday, February 1, 2021, at Aurora Medical Center, in Aurora, Colorado. He was born May 12, 1932, in Elwell, Colorado to Otto B. and Beryl Ehler. Gilford was a 1951 graduate of Johnstown High School. After high school, Gilford enlisted in the Navy and served in the Korean War. Upon returning to the States, Gilford received his Degree in Design Engineering from Colorado State University. It was on the campus of CSU that he met his bride of nearly 63 years, Norma Jo Helzer.

After marriage, Gil and Norma settled down in Wheat Ridge, Colorado. There, they enjoyed suburban life for almost 50 years. They raised three girls and became dedicated members of Wheat Ridge UCC church. In retirement, they moved to Heather Gardens in Aurora, Colorado to downsize and enjoy a few of the finer things in life. Gil enjoyed the friends he made at the club, particularly his buddies in the woodworking shop, who shared his love of woodworking. Many of Gil’s handmade items and artwork adorned his home.

Gil enjoyed an uncanny architectural eye and his talent is evident when you drive the streets of industrial Denver - seeing building after building with his design elements. Over the years, always drafting, designing and dreaming, Gil became an eclectic collector of “stuff”. A self-proclaimed hobbyist, he was quoted as saying “You never know what you might need”. Crafty and cleaver, genuine and kind, he always had a story to tell.

Gil is preceded in death by his parents, Otto and Beryl, and his sister Norma Greubel. He is survived by his wife Norma Jo, his sister Charlotte Woodworth of Phoenix, AZ, his daughter Tamara and son-in-law David Davis of Houston, TX, his daughter Teresa and son-in-law Wayne Bennington of Castle Rock, CO, and his daughter Kathy Ehler of Highlands Ranch, CO. Also survived by 5 grandchildren, Lauren, Joel, Jaret, Mitchell and Adam, and two great-grandchildren, Cade and Carley.

Gilford’s wishes were to be interred at Fort Logan National Cemetery, in Denver, Colorado. Services with Navy Honors will be Friday, February 12, 2021.