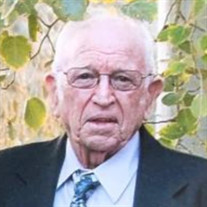 Life History:
Gib was born and raised in Superior, Nebraska, where he farmed alongside his family. Gib then moved to Denver a few years after graduation and later began his career as a Denver Firefighter (1961-1989). Gib married Roberta (Bertie) and they spent 58 years married to one another. Gib was a devoted Husband, Father, Grandfather and Great-Grandfather. He is proceeded in death by his parents and daughter Charlene Wilton. He is survived by daughter, Angela, husband Bruce; son Rob, wife Sharon; daughter Pam, husband Jim; son Clarence, wife Tracy; 14 grandchildren and 8 great-grandchildren. Gib retired and worked for American Target, and with daughter Pam until he was 80. Gib devoted his time working for the church and helping anyone he could. Gib was quite the handyman and mechanic. He could fix anything big or small. Gib enjoyed playing games, camping, traveling and spending anytime he could with friends and family.

Memorial will be held at a later date due to COVID19.

Due to COVID19 restrictions a private burial will be held for the immediate family.
To order memorial trees or send flowers to the family in memory of Gilbert Wilton, please visit our flower store.