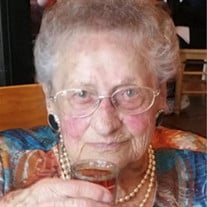 Gertrude Richardson passed away in her sleep on Tuesday, July 13, 2021 at home in Highlands Ranch. She was born on March 3, 1921 in Vienna, Austria to Maximilian and Leopoldine (Pruzek) Prokop. She married Thomas Richardson on September, 23,1961 in Fuerth, Germany. Gertrude worked at the local US Army Quartermaster Laundry and Dry Cleaning activity when she met Tom.

Gertrude was fiercely independent and lived in her own home until she was 97. She survived the Nazi occupation of Austria as a teenager in 1938 and lived much of her early life in Germany. And even though her vocation in trade school was a hat maker, she ended up working on the assembly line making parts for German submarines during WWII. She remained in Germany after the war until she moved to Fountain, Colorado with Tom in 1973. One of her proudest moments was when she became a US citizen in January 1977. She was always the hostess and made friends and neighbors feel welcomed in her home. She loved her family and always said gifts are best given from a warm heart rather than a cold hand.

She is preceded in death by her husband Tom and is survived by her son Glenn and his wife Roxanne, daughter Brigitte and her husband Peter, and 2 grand children, Michael and Amanda. She was laid to rest with her beloved husband in a private ceremony at Fort Logan National Cemetery on Aug 4.
To order memorial trees or send flowers to the family in memory of Gertrude Richardson, please visit our flower store.