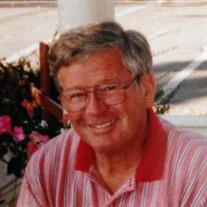 George Woodland of Highlands Ranch was a loved and respected husband, father, grandfather and friend. George died peacefully at his home on Saturday morning surround by his family. He was born September 21, 1931 in Cardinal, Ontario, the son of Charles Woodland and Willamenia Woodland. George was 83.

He immigrated from Canada to Colorado in 1961. He got his first U.S. construction job with Douglas Jardine and Sons in Colorado Springs as a laborer, eventually working his way to the position of foreman. In 1974 he joined Kelran Constructors, Inc. as a superintendent. He quickly became a shareholder in the company and held the position of vice president and general manager. He remained with the company and its affiliates for 24 years. In 1998, he and his partner, Ward Kelley, sold the business to the international engineering, procurement and construction company, The Industrial Company. At the age of 68, rather than retire, he formed his own company in Eagle with his sons Derek and Edward. The company was in business for 14 years, when George retired for good. George managed the infrastructure of some of Colorado’s most high profile construction projects including Denver International Airport, Highlands Ranch, Mountain Star, Red Sky Ranch and Eagle Ranch. His construction career spanned more than 50 years.

In addition to his professional career, George was known as an exceptional gardener who loved to care for his lawn and flowers. He had boundless energy which he channeled into spending time with his family and friends, all of whom would agree with the fact that he had a legendary sense of humor.

George was preceded in death by his parents, his sister Lorraine and brothers, Charles and Arthur. George is survived his wife, Louise of 49 years; their two sons, Derek and Edward (Kristen); five grandchildren, Ross, Kara, Ian, Grant and Luke, his sister, Edith (Hanley) of St. Catherine’s, Ontario and more friends than can be counted. He is profoundly missed by all.

George will be buried in a private ceremony on Wolfe Island, Ontario. He was a simple man who did not want a service, but the family will receive visits or calls from friends at any time to reminisce on his life. In lieu of flowers, the family asks that donations be made in his name to the American Diabetes Association ( www.diabetes.org/donate ).
To order memorial trees or send flowers to the family in memory of George A. Woodland, please visit our flower store.