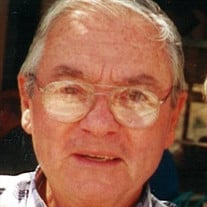 George grew up in Grand Island Nebraska and enlisted into the Navy in 1956. He was stationed over in Hawaii. After the Navy, he worked for the Southern Pacific Railroad as a salesman. He had the opportunity to be a tour guide in the summer of 1961. It was on that summer tour that he met his bride, Rayleen Selke. In September of 1962, they married and had three children, Cari, Todd, and Kelly.

George had many hobbies. He liked to remodel houses and refinish furniture. He enjoyed being with his family and attending many ball games over the years. He was very active and enjoyed working out in the yard with his grandchildren.

He is survived by his wife of 53 years, 3 children and 8 grandchildren. "This is the last time we will have to say goodbye. When we see you in Heaven, it will be forever."

Jeremiah 29:11
"For the plans I have for you," declares the Lord, "plans to prosper you and not to harm you, plans to give you hope and a future."

In lieu of flowers we ask that a donation be made in his name to:
Samaritan's Purse
Operation Christmas Child
P.O. Box 3000
Boone, NC 28607
1-828-262-1980
To order memorial trees or send flowers to the family in memory of George W. McMullen, please visit our flower store.