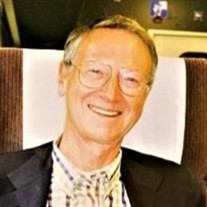 Ed died peacefully on July 26, 2021 at 91 years old. Lovingly remembered, Ed was a man of integrity, passion, and optimism. He was born on January 18, 1930 in Harrington Park, NJ, son of William Henry and Mildred Stewart Wright. Ed had two brothers, John Peter (d. 2019) and William Henry Jr (d. 1998). Ed attended Dumont High School and graduated from Rutgers University in 1951 with a BS in Dairy Husbandry. While in college, Ed met his forever sweetheart, Lenaire Botting, and they were married in 1951 – 70 wonderful years this October. Ed served as a Second Lieutenant in the US Air Force during the Korean conflict, stationed in Washington DC, Alabama, and Okinawa, Japan. Ed’s Air Force career took him and his family to Cornell University where Ed taught ROTC. He pursued a second BS degree in Aeronautical Engineering at the Air Force Institute of Technology in Dayton, OH. The family moved to Mountain Home, ID and then to Great Falls, MT to install Minuteman and Titan missiles underground. In 1963, Ed resigned from the Air Force as a Captain and attended Princeton University to achieve a Master’s degree in Aeronautical Engineering. Upon graduating, the family moved to Glastonbury, CT where Ed worked for United Technologies Research Laboratories and then culminated his career as President of John Deere International in Moline, IL. In 1991, Ed and Lenaire retired to Denver, CO to join their three sons and families.

Ed’s true legacy is how he embraced life with resiliency, compassion, and humor. The overarching theme of his life has been his love, devotion, and respect for Lenaire and their 70-year partnership. The two of them shared everything including all family decisions and responsibilities. Ed was an adventurer enjoying travels around the world with Lenaire and his family, canoeing and camping, sailing, skiing, and attending the many sports events of his grandkids. Ed was passionate about trains; he built an intricate train track with villages and mountainous landscapes in his basement, published a book on the design of a narrow-gauge railway as a sensible alternative to the congested I-70 traffic to CO ski areas, and traveled by train wherever possible. Even after becoming a paraplegic at 77 years old, Ed still considered himself the “luckiest man in the world”. He continued to play tennis and ski until age 87. His optimism, passion for learning and simply finding joy in life were an inspiration to his family and everyone lucky enough to have known him. Ed leaves a loving family including Lenaire, sons: Jeffry (Paula Daukas), Jody (Betsy Wright), and Bill (Sandy McCleland), five grandchildren: Dustin (Cortney Patterson), Peter (Lexci Reveley), Abigail, Lila, Sophia, and three great grandchildren: Emma, Avery, and Emilia. A Celebration of Life is planned for October 4, 2021 at 3:30 PM at the Washington Park Boathouse in Denver, CO. Charitable contributions in Ed’s honor may be made to Craig Hospital Foundation ( https://craighospital.org/foundation/howtogive ).
To order memorial trees or send flowers to the family in memory of Edward Stewart Wright, please visit our flower store.