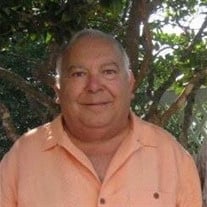 Former Texas resident Edelmiro Leal Sr., 81, died Tuesday December 11th, 2018 in Littleton, Colorado.
Ed was born June 8th,1937 in McAllen Texas to Maria Luisa and Julian Leal. He joined siblings Arnoldo Leal and Alicia Leal Araguez.
He met and married his loving wife Guadalupe Leal on May 25th, 1958. They started their family in 1959 with the birth of their son Edelmiro Leal Jr. Soon after came their three daughters, Norma Leal Drozd, Yolanda Leal, and Ana Leal Derryberry.
Ed worked for Darling Bolt Co. in Houston Texas for many years until he retired in the late 90’s.
Ed is preceded in death by his daughter Yolanda in 1979, and his son Eddie in 2017.
He is survived by his wife Guadalupe, his daughter Norma and husband John Drozd; his daughter Ana; 8 grandchildren and 5 great grandchildren.
Hi will be missed by his favorite dog companions Zazu, Bear and Daisy.
To order memorial trees or send flowers to the family in memory of Edelmiro Leal Sr,, please visit our flower store.