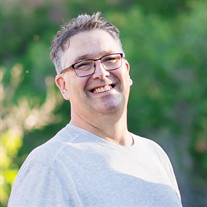 Earl Joseph Drennen, II, age 49 passed away peacefully on November 1, 2021 at his home in Littleton, Colorado.

Earl was born on December 13, 1971 in Columbus, Ohio to Earl Joseph Sr and Hazel Drennen.

Earl joined the Army National Guard in 1989 where he served for 4 years during which time he graduated from Elko High School in Elko, Nevada in 1990. The next year, Earl moved to Lakewood, Colorado where he eventually met his future wife. Earl married Temple (Schwab) Drennen on May 16th, 1998. Out of this union, their two sons, Gabriel and Jacob were born.

Earl met his wife at Walmart where he worked for 13 years. He stayed in the retail business for several years after that and then was employed by Empire Today as the Install Department Manager.

Earl always worked extremely hard to provide for his family and went above and beyond to make sure they were always well taken care of. He was a loving father to his boys. Earl was a respected leader for their Cub Scout Pack #625 and later enjoyed helping out in their Boy Scout troops. He loved watching Gabriel and Jacob play basketball and enjoyed helping in their games by running the clock.

Earl enjoyed traveling and going on adventures with his family. He was a believer in Christ and enjoyed reading and studying the Word with many of his friends.

Earl was preceded in death by his parents, step father, Chapo Leniz, and his older brother, Randy Hughes. Earl is survived by his wife, Temple, two sons, Gabriel and Jacob and many friends in the Littleton and Denver areas.

Services will be held at Seven Stones Cemetery, 9635 North Rampart Range Road, Littleton, Colorado 80125 on Friday, November 19th, 2021 at 10:00am.
To order memorial trees or send flowers to the family in memory of Earl Joseph Drennen II, please visit our flower store.