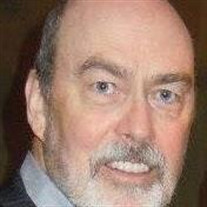 Douglas Alan Burtard passed away on July 31, 2016 in his home in Centennial, CO. He was born in Denver on August 25, 1949. He was a 3rd generation Colorado native and loved his home state. Like both his parents, Doug graduated from South High School; he was in the Class of 1967. As a young child he spent a couple of years in Kansas during his father’s military service. They returned to Denver and he grew up on South High Street throughout his school years. He went to the University of Colorado Boulder in 1967 and graduated with an Electrical Engineering degree in 1971. His first job was with General Electric and it took him to Erie, PA. This job started Doug’s love for travel when he received an assignment in Brazil. The plant manager there was so pleased with Doug’s work that he gave him a bonus - a paid trip to Machu Picchu. Doug did not like being away from Colorado and left PA to return to Denver and got a job with Gates Rubber Company. He worked at the old Gates plant on So. Broadway for 23 years. His engineering specialty was Control Systems for manufacturing. While working for Gates he designed and started up manufacturing control systems at rubber plant locations around the world. His longest project had him in Bulgaria in 1982-83 for 14 months. He had many interesting stories to share of living and working behind the Iron Curtain. Since he was single at the time, he used the company allowance for ‘escaping’ Bulgaria and instead of coming home he opted to travel all over Europe. Highlights included Norway, Greece, Switzerland, Luxemburg, Belgium, Italy, and Germany. When he returned back to Colorado he took the long way home through Hong Kong and Japan. Doug left Gates after some reorganization that would have moved his position out of state. He continued his Engineering work with consulting firms beginning with Hinz Consulting. He then followed former colleagues to Rappley Engineering. He essentially stayed with the same organization through multiple buyouts, first by Veco Engineering and then CH2M Hill. He retired from CH2M Hill in August 2014.
Doug’s love for travel continued throughout his life. He traveled for work and for pleasure (and he often combined the two). Before his marriage, he went to Alaska, Australia, Canada, Hawaii, Korea, Spain, and Belgium as well as many US destinations. Most locations included beautiful scenery and fostered his love of hiking. But no matter where Doug went, he always loved Colorado best. Doug’s love of the Colorado mountains was the motivation for him to later on in life, volunteer time working alongside family and friends on multiple trail crews for The Colorado Trail Foundation.
Doug met his wife, Carolyn Willcox, on May 17, 1989 at a Timberline Tall Club event. They were married May 18, 1991 at Mount Vernon Country Club in Golden, CO and recently celebrated their 25th wedding anniversary. He introduced her to the world of extended travel when she joined him after a work project in Spain in 1989. He renewed his scuba certification when she got her basic PADI card. Carolyn and Doug were able to make great use of their frequent flyer miles obtained through business travel. Destinations included Cuba, Argentina, Chile, Mexico, Belize, Norway, Spain, Portugal, France, Prague, Austria, Ireland, Scotland, New Zealand, Alaska, Hawaii, multiple US cities, and many Caribbean islands for scuba diving. When Doug retired they did a memorable 3 week road trip with their fur child, Chester. This trip included a family wedding along with visits to other family and friends covering 12 states and 4500 miles.
Doug is survived by his wife, Carolyn Willcox Burtard of Centennial, CO. He is also survived by his mother, Marjorie “Marg” Burtard of Englewood, CO and sister, Jill Rice of Bailey, CO. Doug and Carolyn did not have children but have a very special connection to their nieces and nephews and they include: Chris Rice of Greeley, CO; Ryan Rice of Denver, CO; Jessica (Harmon) & Ashley Johstoneaux of Provo, UT; Shannon (Harmon) & Matt Stanley of Salt Lake City, UT; Mark & Aubri Harmon of Salt Lake City, UT; Keith & Amilyn Harmon of Paradise, UT; Jessica Herron of Augusta, GA; Andrea Willcox & Brandon Lynn of Daly City, CA; Eric Willcox of Chicago, IL; Emily (Willcox) & Terry Tittel of Augusta, GA; Hannah Borden of Cincinnati, OH; and Natalie Willcox of Cincinnati, OH. There are many great-nieces and great-nephews that will miss Uncle Doug/Dunkle.
Doug was preceded in death by his father, Wilbur “Bill” Burtard and his BFF Chester.
A Celebration of Doug’s life will be held at 11:00 AM on Thursday, August 11, 2016 at the Rose Garden in Hudson Gardens, 6115 S Santa Fe Drive, Littleton, CO 80120. Casual attire is encouraged.
Memorial donations made in care of the family. Donations will be designated to causes near and dear to Doug at a future date. If anyone would like to donate to the floral tributes planned for the memorial, please call Abloom at 303.470.1700.
To order memorial trees or send flowers to the family in memory of Douglas A. Burtard, please visit our flower store.