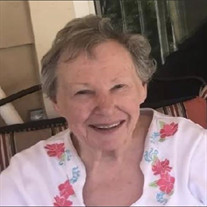 Dorothy (Dee) Jacquelin Cover, the eldest daughter of Stanley Benedict Szczerba and Claire Therese (Sulima Szczerba) Janik, step-daughter of John Janik, was born April 21, 1937 at Fort Sheridan, IL, and died on March 21, 2022 at the age of 84 years and 11 months.

She attended numerous schools due to her father working in the Army Air Corps and graduated from St. Mary’s Academy (Alexandria, VA) in 1954. She worked for the Air Force and the Pentagon following graduation. When her father retired from the Army, she moved to Colorado Springs with her family and worked for the Army Air Defense Command as secretary to a General, receiving civilian honors for this position, until her marriage to James David Cover on November 26, 1966, to whom she remained married for 55 years until her death. During her marriage, she worked for the Howard County (MD) school system until she returned to Colorado in 1990. She moved frequently during her childhood, but found her home in Centennial, CO, where she lived until she moved to Morningstar Senior Living in Parker, CO with her husband. She died peacefully at home with her family around her.

Dee was a member of several organizations including, the National Secretaries Association (Pikes Peak Chapter), the Beta Sigma Phi sorority, and the Women’s International Bowling Congress (CYAC League). She also enjoyed knitting and needlework. She was a volunteer in her community as well as being an avid reader of mystery novels. She traveled extensively with her husband, including trips to Hawaii, Australia, New Zealand, and England as well as cruises to Alaska and through the Panama Canal. She enjoyed outings with her church’s small group and quiet evenings at home.

In lieu of flowers, please express your love to your family as often as possible, the world needs more of that. If you choose to donate to an organization in honor of

Dee, please consider donating to www.BrightFocus.org , which funds groundbreaking research in an urgent effort to discover cures for Alzheimer's disease, macular degeneration and glaucoma, or donate to any vision charity of your preference.

Her life will be celebrated with services on April 23rd, at 10:00am at Pax Christi Catholic Church in Lone Tree. She will be buried in the Cover family plot in Foster Cemetery in New Hampton, MO. Funeral services will be provided by Heflebower Funeral Services ( www.heflebowerfuneralservices.com ), and condolence cards to Dee’s family can be sent to their care at 8955 S Ridgeline Blvd #100, Highlands Ranch, CO 80129.
To order memorial trees or send flowers to the family in memory of Dorothy "Dee" Jacquelin Cover, please visit our flower store.