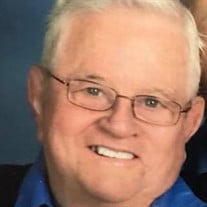 Donald R. Saville, 81 of Beatrice, passed away Wednesday, May 17, 2017 at Bryan West Hospital, Lincoln, NE.
Don was born September 2, 1935 in Delphus, IA to John Kermit and Roxie (Mohler) Saville. He grew up in Redding, IA and later moved to Hastings and Harvard, NE, where he graduated high school in 1953.
Don served in the United States Navy from 1953 to 1962, and was honorably discharged as a hospital corpsman HM1 serving aboard the USS Piedmont. Don married Carolyn Thurin December 28, 1960 in Reno, NV.
Don and Carol resided on the west coast for 11 years in both Cloverdale, CA and North Bend, OR. During that time their son and daughter were born. Don worked in tire service management prior to moving to Sidney, NE in 1971. While in Sidney, Don directed the Educational Service Unit workshop for adults with special needs. Don’s entrepreneurial spirit instigated a move across NE where Don and Carol were small business owners in various communities in southeast Nebraska, most notably the Daylight Donut Shop in Beatrice for over 15 years.
Don loved the outdoors! He spent many weekends camping with friends and relatives. He loved hunting with his son, and fishing with his grandchildren. He was mechanically inclined--fixing most anything, and enjoyed riding horses. He was known to his family and friends as a practical joker and always engaged in friendly banter. In his later years, he loved to socialize with local friends over coffee and cards.
He is survived by his wife of over 56 years, Carolyn, his son Mr. Doug Saville & fiancé (Kristine Rhoades) of Windom, MN, his daughter and son-in-law, Dr. Tammy (Mike) Heflebower of Castle Pines, CO, grandchildren Melissa (John) Turner in ME, Maloree (Dakota) Farmer of AK, Logan Heflebower and Nate Heflebower (CO), great grandchildren, Emmalyn Turner and Ryan Farmer, and sister Phyllis Muth of Cottage Grove, OR, nephews Rick Hackbart and Lonnie Hackbart, Eugene, OR.
To order memorial trees or send flowers to the family in memory of Donald R. Saville, please visit our flower store.