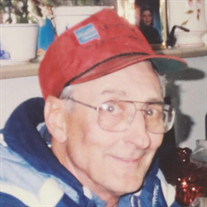 Donald Eugene Rogge, age 91, passed away Tuesday, August 2, 2022 in his home. Don was born August 29, 1930 in Scott City, Kansas to Alfred and Ada (Veal) Rogge. He grew up in Russell Springs, Kansas in a loving family of 1 brother and 3 sisters. After graduation from High School, he became a telegrapher for the railroad and worked in several Colorado mountain towns.

He served from 1953-1955 in the Army spending time in Germany as a radio operator providing liaison between U.S., Belgium and French troops. Don married Verena (McCuistion), who he had met in Fowler, CO., February 26, 1956. Don received his B.S. degree in Mechanical Engineering from Colorado State University in 1960. Three years following were spent in Zanesville, Ohio working for Columbia Cement. Lance and Renee joined the family before returning to Colorado where Don had accepted a job with Lockheed Martin. After 29 years working on the Titan program, he retired.

Restoring vintage cars or being the mechanic to keep an old vehicle humming, was a passion. His friends in the Vintage Chevrolet Club of America were his special support. Don and Verena attended annual Chevy meets in many locations throughout the US to enjoy shared interests. He coached youth soccer for Lance and Dana and built the balance beam for Renee in her gymnastic years.

Don was preceded in death by his parents; his sister, Karleen; and his brother, Bill. He is survived by his wife Verena; his son Lance and wife Shannon; daughter Renee McIntyre and husband Todd; his son Dana; grandson Brett McIntyre; grandson Scott McIntyre; his sister Nevada Farris; and sister Myra Wilson and husband Chuck. Many nieces and nephews have been a special part of his life. Family and friends will celebrate a memorial at his home August 28th at noon at 8337 W. Trail South Dr., Littleton, CO. Please send RSVP to varogge@gmail.com .
To order memorial trees or send flowers to the family in memory of Donald E. Rogge, please visit our flower store.