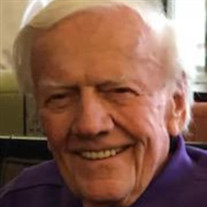 Dick Dooley, 94, passed away on July 22, 2021, surround with love by his family. He was born in Selma, Iowa and had a twin sister, Darlene. She was his best friend and why he always wanted to share. He lived much of his youth in Birmingham, Iowa before transferring his senior year to play basketball and run track at Stockport High School, in Stockport, Iowa.

After graduation, he was drafted to the Army and was part of the Armored Division where he served 2 years. After service, he hitchhiked to California to go to College on the GI Bill. He attended Modesto Junior College before transferring to the College (University) of the Pacific in Stockton, CA. During a visit back to Iowa, he met the “Love of his Life” at a skating rink. Their love lasted through his college years and being miles away. He married Roxiann on December 3, 1950. They moved to Des Moines that year.

He worked for Monarch Industries and Sherwin Williams. He was the top salesman contracting the Iowa State Fair Grounds and the State Capital. He realized the only way to get ahead was to start a business. He became a successful business man in numerous businesses, manufacturing and wholesaling nationally along with other countries including China. Starting Dooley Manufacturing, Dooley Furniture, Dooley & Associates, and trucking to handle all his products.

He was generous to his employees and treated them as family. He’s favorite saying was, “Never ask someone to do something you wouldn’t do.” He was an entrepreneur being the first into marker boards and loved making a deal. His mind never stopped when it came to business ideas and making things happen. He was doing deals until the day he passed. He was charming, and touched all who meant him. He was always smiling, laughing and joking. He was our Hero and the best husband, father, grandfather, friend and mentor one could have.
To order memorial trees or send flowers to the family in memory of Dick Dooley, please visit our flower store.