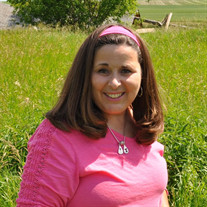 Diane Michele Leonard, née Beste, was born February 27th, 1964 to Darrell James Beste and LaVerna Bader Schnarr Beste at Deuel County Memorial Hospital in Clear Lake, South Dakota. She died and went home to her Lord Jesus Christ at the age of 52 on Thursday, May 19th, 2016 at her home in Highlands Ranch, Colorado, surrounded by her family. She had a wonderfully unique upbringing as the youngest of 13 children, with many older siblings doting on her and caring for her. Diane lived on a rural farm with her large family until she was in the eighth grade, when they moved to nearby Estelline, South Dakota. She graduated from Estelline High School in 1982 and attended South Dakota State University, earning a degree in mathematics in 1986. Diane then went on to work as a programmer/analyst for three years in Minneapolis/St. Paul.

After meeting her future husband at a friend’s wedding, Diane moved to Denver, where Rob lived, in June of 1989. She took a job at UNIPAC as a programmer/analyst. Diane married Robert Eugene Leonard Jr. on June 23rd, 1990 in Littleton, Colorado at St. James Presbyterian Church. They were married for nearly 26 years and created a beautiful life together. After their wedding, they moved to Highlands Ranch, Colorado for a few years before returning to South Dakota, where they settled temporarily in Sioux Falls. Their daughter, Alyssa Nicole, was born on April 15th, 1994. Diane, Rob, and Alyssa returned to Highlands Ranch that summer. Two years later, on April 26th, 1996, Rob and Diane had a son, Nicholas Robert Eugene. They still call Highlands Ranch home while making bi-annual trips back to South Dakota to visit family.

Diane was a loving, devoted, and passionate wife, mother, daughter, and sibling. She spent the majority of her free time supporting her kids at their various activities, including hundreds of baseball and softball games, tournaments, and events. Nothing gave her more joy than spending time with family. For several years, she was a stay-at-home mom, putting her family before anything else in her life. As her children grew, Diane returned to work part time as an audiology tech for DCSD, devoting many hours to caring for hearing-impaired children and making several great friends. Diane loved to smile, sing, hug, laugh, and talk for hours with various family and friends. She also enjoyed scrapbooking, building puzzles, baking, shopping, and reading.

She was preceded in death by her parents, Darrell and LaVerna; and her two brothers Terry, age 24 in 1970 and Dickie (Dwayne) as an infant in 1955.

Diane’s greatest legacy was not her legacy at all – it was the legacy of her savior Jesus Christ whose love shown through her every day of her life. Diane committed her life to Jesus when she was a young girl and her trust in His faithfulness because of His saving act in her life was so evident. She was a regular part of various church communities. When Diane, Rob, Alyssa and Nick began attending Grace Presbyterian Church in 2005, Diane was a faithful participant in small groups, youth group activities, and served as a confirmation mentor. It was a faith she received from her parents and a faith she imparted on to her family, encouraging them constantly in the Lord and in His Word and promises. She knew this life was temporary and longed to meet her savior, restored wholly to a new body. One of her favorite verses was Isaiah 40:31. “But those who hope in the Lord will renew their strength. They will soar on wings like eagles; they will run and not grow weary. They will walk and not faint.” She clung to the strength of Jesus to be her joy, light, and life in everything she did.
Diane’s memorial service will be held at 3pm on Tuesday, May 24th, 2016 at St. James Presbyterian Church in Littleton, Colorado. A reception will follow at the church.

In lieu of flowers, the family requests memorial donations to the St. Joseph’s Cancer Centers of Colorado. The many wonderful people there devoted years of love and care to Diane and the family is so grateful to all of them.
To order memorial trees or send flowers to the family in memory of Diane Michele Leonard, please visit our flower store.