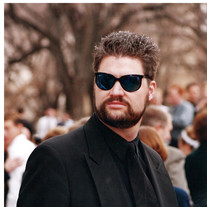 David Roberts Caldwell, 1966-2019 passed away on February 24, 2019 at the age of 52. Our most tender feelings accompany him into the next estate of his eternal journey.
David was born December 6, 1966 to Lee and Joyce Caldwell in Okinawa (Japan). He was never a “normal” child, opting instead to live life to its fullest and surrounding himself with all things of good report and praiseworthy. He had an unquenchable thirst for knowledge. It is reported that his favorite word in childhood was, “Why?” He would oft times read instruction manuals for games, etc., and then report what was wrong or why something would not work. Rule books, for David, were often more of a nuisance than a solution.
David was a faithful member of the Church of Jesus Christ of Latter-day Saints where he served in multiple callings including a two-year mission to South Carolina. His favorite church calling over the years was that of Gospel Doctrine teacher which allowed him to study the deep, meaningful aspects of the Plan of Salvation and the Atonement of Jesus Christ. We have all heard about people who find the time every single day to study their scriptures and to pray. David was that person. Without fail. Every day.
David will also be remembered for his dedicated efforts on behalf of the Utah Valley Youth Symphony Orchestra where he served as President of the Board of Directors and Tour Director. In that capacity David was able to satisfy his craving for international travel and to share life’s adventure with fifty to sixty of his friends at a time. He was a fine musician, with particular interest in the cello and low brass, which skills found him performing with the Orchestra in concert halls all over the world including Carnegie Hall in New York City, the Barbican Center in London, Gulbenkian Hall in Lisbon, and Abravanel Hall in Salt Lake City just to name a few.
David’s devotion to his family is unrivaled. He knew on the deepest spiritual level possible that he was divinely led to his wife, Jenny, and that their union was fore-ordained before either of them took up residency on Planet Earth.
Caldwell Family weekend activities always took center stage with celebrations of birthdays, graduations, and anything else worthy of mention. Watching his family at sporting activities, music recitals and school events was always an opportunity for David to brag a little bit about his family. He was especially moved by watching his family progress in the Church with baptisms, ordinations, and personal spiritual growth. Without a doubt, David’s universe revolved around his devoted wife and loving children.
David is survived by his father, Lee (Betsy) Caldwell, as well as his wife, Jenny, his three children, Ethan, Alex and Taylor, his brother, Conrad (Karen) Caldwell, and his sister, Janet (Randy) Brown. He is preceded in death by his mother, Joyce Caldwell and his sister, Shirley. Additional surviving family are Kyle (Liz) Gajewsky, Diana (David) Nitsch, Ken (Teresa) Gajewsky, Karen (Jeff) Leonhardt, and Vicki Bishop.
David was always willing (and patient) to assist his less enlightened colleagues in the realms of life skills and computer technology. He will be remembered fondly by his friends as David, the Geek. His exasperation with the inexperience of his less knowledgeable contemporaries was usually met with a wry smile and softly spoken epithet, “I’ll be nicer, if you’ll be smarter!” David is irreplaceable, and he surely will be missed. We love you, David.
To order memorial trees or send flowers to the family in memory of David R. Caldwell, please visit our flower store.