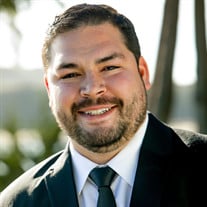 Danny was born on December 8, 1986, at Stanford Hospital in Palo Alto, California. He attended St. Francis High School, where he excelled academically and was the wrestling team captain. Danny graduated Cum Laude from UCLA in 2009 with a degree in Economics. After graduation, he held several jobs, before joining MuleSoft in 2012 doing sales operations and worked there through 2017. After leaving MuleSoft, he continued his career within sales operations at several tech companies, eventually rising to the level of Sr. Manager at Kore.ai. On January 27, 2018, Danny married Svetlana Filipson in Half Moon Bay, CA in the presence of family and close friends. On January 26, 2021, they welcomed their son, Luka Bruno, who is the best part of both his parents and brought Danny endless joy.

Danny loved his wife and son unconditionally, and his biggest wish and ambition in life was to be a good father and husband. He also adored his dogs Zaika and Angus. From an early age, Danny enjoyed learning, nature, travel and scuba diving. He traveled extensively all over the US and the world with his family, and later with his wife. Growing up, Danny enjoyed long camping trips in the California wilderness and the high Sierra Mountains with his buddies. Danny loved to camp, build fires, fly fish and tell stories. He was also very fond of smoking delicious meat, cooking and making hot sauce. And he absolutely loved dancing with his son!

Danny was a good man with a kind heart, and he deeply cared about everyone around him. He would tell us to always be kind to each other and to love each other no matter what challenges each of us face. He was very loved and will be deeply missed by his friends and family.

May Danny’s soul rest peacefully in pure and enduring love. There will be a celebration of life for Danny in California in 2022.
To order memorial trees or send flowers to the family in memory of Daniel "Danny" Bruno, please visit our flower store.