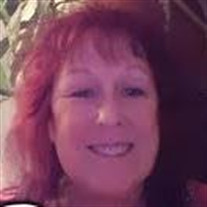 Cindy Ann Cunningham was born on March 3rd, 1958 to Milton Kukhahn and Marian Maatta in Detroit, Michigan. She passed away on January 19th, 2020 in Littleton, Colorado at the age of 61.

Cindy grew up in Livonia, Michigan. There, she attended Franklin High School, from where she graduated in 1976. Cindy went on to be a medical assistant.

She was married to Frank Cunningham who helped her raise her son, Jason, and later divorced. Cindy was preceded in death by her son, Jason; her brother, Dennis Kukhahn; her mother, Marian Maatta; and her father, Milton Kukhahn.

She is survived by her brother, Kerry Kukhahn; sisters, Sheryl Personett and Diane Peake; her significant other, David Kennedy; grandchildren, Allison & Landon Cunningham; her niece, Denise Jollie; and her nephew, Kristopher Kukhahn. She will be greatly missed by all.
To order memorial trees or send flowers to the family in memory of Cindy Cunningham, please visit our flower store.