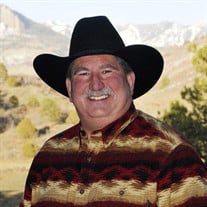 Chris Alan Truax, age 67, passed away Monday, February 17, 2020 in Aurora, Colorado. He passed away in the presence of his son and close friends. Chris was born August 13, 1952 in Wichita, Kansas, to William Truax and Lillian Powell.

His career started at the Coors Brewery in Golden, Colorado Later he became a distributor representative for Adolph Coors Company as well as a sales executive for AT&T, Lucent Technologies, and AG Communications Systems that moved Chris around the United States. Chris returned to and settled in Colorado in 1991.

Chris was an advocate for wildlife and the outdoors. A lifelong avid hunter and angler, Chris was committed to the conservation of the outdoors for wildlife habitat. Through his love of hunting also came a deep passion for firearms. He enjoyed shooting handguns, rifles, and shotguns with family and friends.

Chris was a devoted sports fan. His team was any Denver sports team but especially the Denver Broncos. He would be able to tell stories of games from years prior and remember vivid details as if they were yesterday.

Chris was a stranger to no one with a personality that would light up a room. Wherever he went, he would strike up a conversation with a stranger and make them feel as if they had been friends for years.

Chris is survived in death by his son Mark Truax and daughter-in law Kelsey (Dunigan) Truax as well as many cousins, aunts and uncles throughout the Midwest. He is preceded in death by his parents and brother, John Truax.

Chris's celebration of life will be Saturday, April 18th from 2 p.m. to 5-ish at the ViewHouse in the Denver Tech Center in their back private dining room (7101 S Clinton St, Centennial, CO 80112). This is a celebration, so you are encouraged to come prepared to celebrate Chris’s life with friends and family. Country music will be played. Coors Banquet will be drank. And a story or two will be told—Chris style. Casual dress, please. Jeans, boots, and cowboy hats are all welcome.

Expressions of love and condolence can be sent to Mark Truax via this page or sent personally. If desired, please donate to the American Heart Association with a tribute to Chris through the following link: t.ly/8p3D3.
To order memorial trees or send flowers to the family in memory of Chris Alan Truax, please visit our flower store.