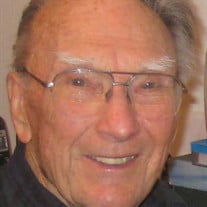 Charles Lewis Hamilton was born on December 9, 1924 to Lenore and Albert Hamilton in Mulberry, Kansas. He made his transition on September 4, 2017. Charles parents moved to Minneapolis in 1935 and he lived there most of his life. He was a WWII veteran serving in the Army as a Medic. He and wife Dorothy were devoted to each other and had 70 and ½ years of marriage. They moved to Silver Lake, near Turtle Lake, Wisconsin fulltime in around 2000. Where they enjoyed living on the lake and all it has to offer. Charles, his son Rick and a few helpers built the house on Silver Lake. It was his dream house. He could make just about anything and spent hours in his shop wood working and creating, Menard’s was his favorite place next to the lake. He worked in Minneapolis for Haas Display until he retired in the early 90’s. He is preceded in passing by his parents and his wife Dorothy and survived by his Son and Daughter in Law Rick and Patsy Hamilton of Castle Rock, Colorado, Daughter and Son In Law Cindy Hamilton and Ken Brecheisen of Boulder, Colorado, Granddaughter Erin Hamilton of Alexandria, Virginia, Grandson Tyler Stocker of Arvada, Colorado and Nephew David Olson of Minneapolis, Minnesota. Words cannot describe how we will be missed.
To order memorial trees or send flowers to the family in memory of Charles L. Hamilton, please visit our flower store.