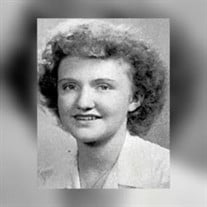 Born in Green Island, New York, Catherine was the daughter of the late Joseph and Elizabeth (Healey) Mitchell. Catherine is preceded in death by her brother Joseph F. Mitchell, sister Joan (Mitchell) Masterson, and a great granddaughter Mary Agnes Pittman.

Upon graduation from high school and during World War II, Catherine worked as a telephone operator for the New York Telephone Company, and Bausch and Lomb, Rochester, New York. After raising her two children, Catherine held positions in clothing and gift boutiques and in the beauty industry. In addition to being a loving wife, sister, mother, grandmother, great grandmother and friend, Catherine had a timeless beauty and sense of style and was immensely proud of her Irish heritage.

A private family viewing will be held at Heflebower Funeral and Cremation Services prior to the Mass of Christian Burial which will take place at 1:30 pm on June 28th at St. Mark Catholic Church in Highlands Ranch, Colorado. Interment will be in St. Joseph's Cemetery, Waterford, New York at a later date.

Memorial contributions may be made to the Little Sisters of the Poor, Mullen House, Denver, Colorado.
To order memorial trees or send flowers to the family in memory of Catherine Elizabeth Palmere, please visit our flower store.