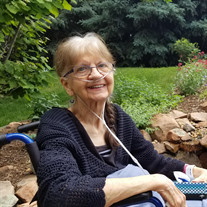 Carole passed from this earthly life on Monday 09-09-19 at 9:09 am at Porter Hospice in Centennial, CO. She was 83.
Carole battled many illnesses for years including lung and breast cancer. It was a gruelingly, long road, but Carole was a fighter and she lived many years past her prognosis. She is peaceful now in the arms of our Lord, her son Jim, sister Shirley, her parents Al & Gladys, along with other family members and friends.
Carole is survived by her two daughters and their husbands, Deborah & David Elliott of Grand Junction, CO and Sherri & Wayne Connell of Parker, CO, who remained by her side throughout her long journey of suffering. She is also survived by her brother Jim Andrews & wife Darling of Freeburg, Ill and her sister LaVerne Ostermann & husband Jack of Clinton, MO; her grandchildren Holly McNeill of Grand Junction, CO and Bobby Mitchell of Ft. Collins, CO; and great grandchildren Cain Hendricks & Avery Carey of Grand Junction and Conor Mitchell of Ft Collins.
Carole loved music! She was dancing in the crib, before she could walk, earning her the nickname, “Paddlefoot” from her Daddy. She danced around the house, doing her chores and even wore her tap shoes to school! She went to Cahokia High School in Illinois, where she played the French horn in the band and was the Prom Queen her Senior year. Carole went to college at Southern Illinois University, where Carole the dancer met Ron the musician. Carole and Ron were married in 1955 and had three children.
Later, Carole and the children moved to Colorado, where she was a very successful Fashion Coordinator for Koret of California, competing in a man’s world. She found her niche as a merchandiser, clothing representative and model. After moving to Grand Junction, she opened her own high fashion women’s shop downtown. Next, Carole moved to Wyoming, where she became a very competitive in radio advertising sales and property management, winning many contests and opening accounts that nobody else could!
When Carole retired from her careers, she continued her passion for people and making a difference in the lives of others, everywhere she went. Carole used her business and people skills when she founded a very successful organization called, The Breakfast Club Singles 50+. She started with small breakfast meetings, where people could meet new friends, but it didn’t stop there! Carole’s personal touch of answering the phone lines where she talked to countless single, widowed and divorced people for many hours, inviting them to the breakfasts and greeting them at the door with a giant smile and hug, set the groundwork for the popularity and reputation of this club! With the help of her amazing TBC team, it grew to over 700 members and even more chapters opened up in Colorado, adding more and more events and activities! Carole continued to answer the phone line and plan events, even after due to health issues, she could no longer attend the events … that is what a selfless person Carole was. Eventually, her illness became too great to do so, which really broke her heart. TBC was her life’s work to embrace people with love and connect them with life changing companionships. Many friendships were formed, and lives were changed through TBC, which still remains active today!
Carole was also on the Executive Board of the Invisible Disabilities Association (IDA). She was their biggest champion, lending wonderful ideas, inspiration and excitement to the board. She loved to share their message of awareness, education and support for millions living with illness, pain and disability to everyone she met, right up until the last weeks of her life.
Carole loved her parents, siblings, cousins and family more than anything on this earth. Though Carole was very successful in her career and her non-profit work, Carole’s children, grandchildren and great grandchildren were her most cherished accomplishments. And Carole’s love for people didn’t stop with her career, TBC, IDA nor her family. Even when Carole was ill and struggling, she was known for taking someone’s hand and thanking them for caring for her, followed by blowing them a big kiss on their way out the door!
Carole fought a very long, difficult and painful battle with cancer for eight and a half years. Despite her loving, giving, selfless demeanor, she was the toughest, feistiest, most determined person we have ever known, far surpassing any prognosis ever given. Her faith remained strong and she would be the first to tell you that “only by the grace of God” could she do it. Carole may not be with us physically on this earth anymore, but she will always be in our hearts, encouraging us all to by example to reach out to others, no matter where you are in life.
Carole’s Celebration of Life Funeral Services will be held for friends and family on Thursday, September 12 at 2:00 pm at the Highline Community Church, followed by a reception with her favorite, ice cream and bananas sundaes! A graveside service for family and close friends will be held at Elizabeth Cemetery after the reception.

Per Carole’s wishes, please make a donation to the Invisible Disabilities Association in lieu of flowers. All donations will be made in memory of Carole. Go to: giveinmemory.myida.org. God bless!

http://GiveInMemory.MyIDA.org
To order memorial trees or send flowers to the family in memory of Carole L. Mitchell, please visit our flower store.