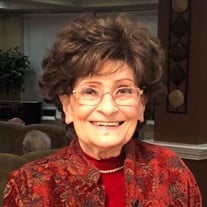 Carol Elizabeth Hessler-Hutt, 83, of Sterling, CO passed away on Tuesday, May 21, 2019. Carol
was born Jan. 9, 1936 in Sterling, CO to Ray and Esther (Foos) Hessler. She lived in Merino, CO on their family’s ranch where she attended Merino Schools, graduating from Merino High School in 1954. Carol went on to receive her Associates Degree from Northeastern Junior College where she was a member of the Phi Theta Kappa Sorority. She was a long term substitute teacher for the Merino School District.

Carol’s long time profession was in the insurance industry where she began her career with High Plains Agency, in Sterling. Several years into her career, she became co-owner of the agency and was recognized as one of the top female business owners in Sterling. She later sold the business to Kellogg-Ewing Insurance Agency where she remained until her retirement.

Carol was an active and faithful member of the Merino Methodist Church, and she later transferred her membership to Christ United Methodist Church in Sterling. She was a member of the Christ United Methodist Women’s Group and served on several other committees within the church. Being a very talented musician, Carol shared her love of music playing piano and organ for church services, weddings, and funerals starting at age eleven. The many pink rose bushes surrounding her home brought her great joy. Carol enjoyed baking, staying active and her Denver Broncos. She is survived by her daughter, Dianne Forge and husband, Greg; grandchildren, Samantha and Austin Forge; several nieces and a nephew. She is preceded in death by her daughter, Janice Hutt; parents, Ray and Esther Hessler; and brother, Tom Ramirez.
To order memorial trees or send flowers to the family in memory of Carol Elizabeth Hessler-Hutt, please visit our flower store.