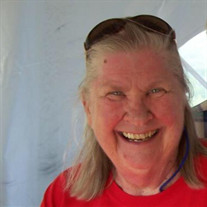 This is to announce the passing of Carol Jane Gates aged 87. She passed away on Thursday,April 22, 2021 in Littleton. Carol was born in Madison,Wisconsin on September 8th, 1934to Elsie (Thielke) and Henry John Schulenburg. She grew up on a farm in Middletonwhere after high school she worked for Madison Gas and Electric Company. She met Neil Stanley Gates.They loved to bowl and go out for a night on the town. They were married April 12,1958. For their honeymoon, they traveled across the United States where they fell in love with Colorado. In 1963,Neil and Carol packed everything they owned and moved to Colorado where they spent the rest of their lives living and raising children in Littleton. Carol had two children Craig Gates and Alyson Fritz(Gates). Raising two kids became her full time job where she spent countless hours taking them to all their activities and supporting them any way she could. Anyone who knew Carol knew her love for a great card game and the laughter that came with it. Her siblings Velma, LaVern, Melvin and Elmor precede her in death. Carol is survived by her husband,Neil Gates, children Craig and Alyson Fritz(Gates) and two grandchildren, Tyler Fritz and Nicole Fritz.Her forever smile will live onin Nicole and Tyler. Carol spent countless hours with her grandchildren. She loved to have them around to play with, take them on short day trips to the library, and take them out for ice cream.

Carol’s funeral mass will be on Friday April 30that 10:30 at St. Mary’s Catholic Church 6853 S. Prince St. Littleton, CO in St. Joseph’s Chapel, which is located across the parking lot from the main Church. She will be buried at Littleton Cemetery.
To order memorial trees or send flowers to the family in memory of Carol Gates, please visit our flower store.