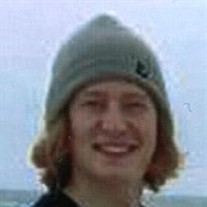 Caleb loved music and playing guitar. He received his first guitar as a Christmas present when he was 13 and was primarily self taught. He attended Highlands Ranch High School where he expanded upon his guitar skills and made many true friends. Upon graduation he joined the U.S. Army, where he served for six months. Caleb also really enjoyed rock climbing, working out, traveling around the US working at trade shows, and meeting new people at Mile High Spirits. His spirit shined through his smile, his sense of humor and his love for everyone he met.
Caleb is survived by his mother and father, Jessica and Brandon Davis; his brother Garrett and sister Madison. He also leaves behind grandparents Anne Coe, Steve and Cathy Smith, and Pam and Kent Burger. Along with several aunts, uncles and cousins from Colorado to Kansas.
To order memorial trees or send flowers to the family in memory of Caleb Andrew Davis, please visit our flower store.