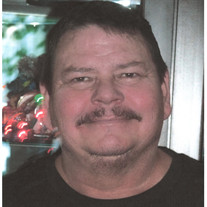 Bill Hampton Dale, beloved husband and father, passed from this life at age 58 on August 5, 2016, at University of Colorado Hospital, Aurora, from complications of lung cancer.
He was born May 14, 1958, in Cincinnati, OH to Wade Hampton Dale and Hattie Mae Deaton. He grew up in Glen Este, OH and attended Glen Este High School. He furthered his education at United Truck Masters and pursued a career in truck driving throughout his life in Ohio, Kentucky, North Carolina, and most recently working for Domenico’s Transportation in Denver before forming his own trucking business.
Bill married Sandra Rouse on October 7, 2013, in Centennial. His children include Rodney Brock, Loveland, OH; Brint Brock, Gatlinburg, TN; Lance Dale, Aurora; Blake Dale, Morrison; Cody Dale, Centennial; and stepson Matthew Martin, Lochbuie.
He enjoyed NASCAR, dirt track racing, and fishing. He served in the US Army from 1977-79, stationed at Fort Benning, GA.
Surviving are all of his sons; wife, Sandra Dale, Centennial; one grandchild, Bentley Brock, Loveland, OH; and sisters, Joetta Amyx of Russellville, OH, and Nancy Wade Bryant of Williamsburg, KY, as well as several nieces and nephews. He was preceded in death by his father, mother, and a brother, Jimmie Dale.
Graveside services will be performed at 11:15 a.m. on August 17, 2016, at Fort Logan National Cemetery, 4400 W Kenyon Ave, Denver, with memorial services to follow.
In lieu of flowers, memorial donations are suggested to Campaign for Tobacco-Free Kids, http://www.tobaccofreekids.org/ .
Graveside services with Military Honors will be held 11:15 AM - Wednesday, August 17, 2016 at Fort Logan National Cemetery. Friends and family gather by 11:00 AM at Staging area C, 4400 West Kenyon Avenue, Denver CO. Enter the cemetery through the North Gate off of Sheridan Blvd. and drive straight ahead on Denver Drive.
Following the graveside services the family will be having a celebration-of-life service at Englewood Recreation Center, 1155 W Oxford Ave, Englewood, 80110
To order memorial trees or send flowers to the family in memory of Bill H. Dale, please visit our flower store.