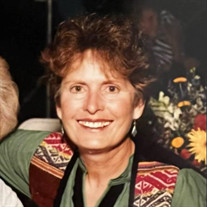 Ann Fitzgerald Cogswell, who was also known by her maiden name, Ann Fitzgerald Heaphy, and her first married name, Ann Fitzgerald Stanton, was born in Detroit, Michigan on May 10, 1944. She passed away peacefully in her sleep in Lone Tree, Colorado on March 22, 2022 after courageously battling debilitating complications related to Valley Fever for over a decade. She was 77 years old.

Ann was the beloved mother of Ted, Kristen, and Patrick Stanton. She was also a doting grandmother to Jade, Graeme, Elizabeth, Caleigh, and Declan Stanton and a devoted caretaker to many animals, including a turtle, cats, dogs, guinea pigs, horses, ducks, and geese.

In addition to her children and grandchildren, Ann will be missed by her first husband, Edward C. Stanton III, and her beloved daughters-in-law: Tracy Monroe, Katie Jacobs Stanton, and Sara Wessel-Stanton.

Ann was the daughter of John Merrill Heaphy and Catherine Heaphy née Feeney. She was also the adored little sister to Jack, Joan, and Bill Heaphy.

Ann began her collegiate studies at the University of Michigan and, after a hiatus to raise her three young children, completed her bachelor's degree in writing at Sarah Lawrence College. She faithfully worked as a writer and photographer throughout her adult life, leaving behind a body of work that will endure long after her passing.

In the summer of 1980, while visiting Estes Park, Colorado, Ann fell in love with the Rocky Mountains. She said she felt a spiritual calling that told her she belonged there, so she eventually moved to and put down roots in Colorado. She particularly loved summer wildflowers and getting together with her writing group near her home in Buena Vista.

Ann will be cremated and her children will hold a memorial service for her near Estes Park, Colorado at a later date.
If you would like to honor Ann’s life, in lieu of flowers, please make a donation to the Dumb Friends League of Denver or an animal charity of your choice.
To order memorial trees or send flowers to the family in memory of Ann Fitzgerald Cogswell, please visit our flower store.