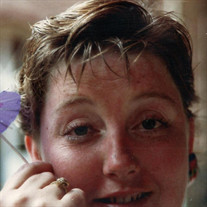 We lost a beautiful soul when Allison Prescott passed away at her home in Sedalia, CO. on June 21, 2020.

Allison, daughter of Frank and Patty (McIntyre) Prescott, was raised in Longmont and graduated from Niwot High School in 1978. She attended the Culinary Institute of America in Hyde Park, New York, graduating in 1982. Allison worked in Boulder at A La Carte restaurant for Chef Joe Boches and at Pelican Pete's restaurant for owner, Pete Brophy. She met her future husband, Jeff Rubach while they were both chefs at Pelican Pete's.
She and Jeff then purchased the Sedalia Grill, formerly Johnson's Corner, and ran it successfully for five years.

Being the strong and independent person she was, Allison then started her own catering company, Plum Creek Catering. She catered for weddings, private parties, business lunches and corporate flight departments. At Liberty Media, Allison will always be remembered for her delicious homemade chocolate chip and oatmeal, raisin cookies. She believed in Virginia Wolfe's quote; "One cannot think well, love well, or sleep well, if one has not dined well."


She was preceded in death by her father Frank Prescott and grandparents; Paul and Serephina McIntyre and Charles and Vera Prescott.


The world is less bright without Allison.

A Celebration of Life will be scheduled at a later date.
To order memorial trees or send flowers to the family in memory of Allison Louise Prescott, please visit our flower store.