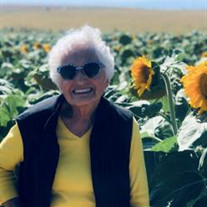 Her favorite people called her Oma. But before she was a 14-time “Oma” to her grandchildren, she was Mrs. Charles Walker: registered nurse and mother of six from Baldwin, New York. And before, that, Agnes Stapff: born in the high mountains of the Bavarian Alps on August 29, 1929. Agnes “Oma” Stapff Walker passed away October 31, 2021 at the age of 92 in Highlands Ranch, Colorado, peacefully and surrounded by family members.

In 2012, nine years before her passing, Agnes wrote a story about a wildflower from the high mountains that makes a long and arduous journey ending in a rock garden in New York. Titled “A Natural Beauty”, she dedicated the story to her youngest granddaughter, Olivia, and said that the theme she hopes will shine through the story is acceptance.

It’s hard to read the story and not to think that her motivation in writing it was autobiographical. She details the flower’s long journey in a dark suitcase, whose only breath of fresh air comes when the customs security guards examine her with their “pinching and poking” and insulting comments. As many who knew Agnes will recall, she herself travelled from the high mountains of Bavaria, Germany when she was 24 years old across the Atlantic in a ship arriving at Ellis Island. She, too, endured a long and lonely journey, during which she was harassed by customs officers who searched her bags and made her toss her German salami (a parting gift from a boyfriend, she said) overboard. If you knew Agnes, you can imagine her distress at the wasting of a perfectly good salami.

Agnes writes how the flower cries the whole journey, but that her tears in fact keep her alive in the absence of fresh water. Having grown up in Nazi Germany during WWII, then moving to a new continent alone without any sort of safety net, Agnes’ life was not without hardship or tears, either, but she would tell you that these difficult experiences made her stronger and more appreciative of life’s beauty. She was known to say, “Enjoy everything in life, especially the little things.”

Upon arriving in New York, our flower protagonist braves a long, cold winter by digging her “legs” deep into the snow until reaching soil; and by the time Spring arrives, she has planted roots and is able to grow stronger and more beautiful, even than before. Agnes, too, weathered a difficult period of adjustment upon arriving in America, which began at the cash register of an ice cream parlor in Florida, where she worked for pennies until she had learned enough English and saved enough money to begin nursing school in New York. By putting in the work and “digging her legs in deep until she reached soil”, she too was able to lay down the roots for what would become a successful nursing career, a 48-year marriage to Charles J. Walker and six children: Louise, Charles “Buddy” Jr., Christine, Suzanne, Elizabeth and Barbara.

Agnes’ story of the flower goes on to detail the trouble she has fitting in with the others, who look down on her because she looks different, and who tell her to go back to where she came from because she doesn’t belong. The flower tells her bullies that they can say what they want, but that she could teach them a thing or two because she is resilient, and she is a survivor. I think it’s fair to say that anyone who knew Agnes has learned “a thing or two” from her along the way.

Agnes’ flower – her spirit – didn’t wither as she grew older, and it won’t in her death, either. She has cultivated and bloomed a loving family of six children, fourteen grandchildren and dozens of other extended family and friends on whose hearts she has left an indelible mark. We all have stories of times she made us feel happy, and even more when she made us laugh (sometimes unintentionally). We all have a favorite recipe, from pink ice cream to Leberknödelsuppe, that someday we will pass on to our own grandchildren. We have a favorite photograph or two, on the back of which she likely wrote some poignant, though possibly inaccurate, caption. And we have a song that will always remind us of her beautiful voice, because whether singing “Happy Birthday” over speakerphone or performing the hymnal Panis Angelicus to a church full of onlookers, she always served up her best soprano.

I will end with a few words from Agnes’ late husband, Charles J. Walker, which he wrote shortly before his own death in 2007: “I am the luckiest man on Earth. I have the greatest wife, mother [to our children], and friend. She has been put through the tortures of the damned and put up with it. She has served her time and will go straight through the gates.”

In lieu of flowers, donations would be appreciated: