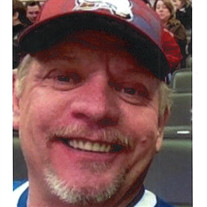 William J. Pennstrom, Jr. of Highlands Ranch, Colorado passed away at his home, early Tuesday morning, January 31, 2017. Born on June 5, 1958, Bill was 58 years young. He was the son of the late William Joseph Sr and Joan (Bersch) Pennstrom. He is survived by his best friend and wife Kathy, loving sons William (Will), and Benjamin (Ben), of Denver Colorado, and loving daughter Christine, of Washington, Missouri. Also surviving: Bill’s sister Jan Cheaney of Viburnum, Missouri, sister Kim Leahy and husband Jack of Ironton, Missouri, sister Sandy Jones and husband Bill of Caledonia, Missouri, and sister Lori Compton and husband George of Flowery Branch, Georgia. Bill was blessed with fourteen wonderful nieces and nephews and 14 precious great-nieces and nephews. In addition to his parents, Bill was preceded in death by his brother Daniel Pennstrom, sister Cynthia Nickelson, her husband Larry, brother-in-law Mike Cheaney, and great-niece Zoey Layne Leahy. Bill developed various passions over his lifetime. He was an accomplished trumpet player in his younger years, and played some mean Foosball. He loved slalom waterskiing, fishing, and camping. Family was always first, both immediate and extended, with his professional life a close second. He was a “pretty good” bowler in his day, with a 299 ring to show for it. He remained a fiercely loyal fan of the St. Louis Cardinals, the Broncos became his favorite football team, and the Colorado Avalanche became his favorite team to coach from the stands. Those who have witnessed his love of hockey also know that he loved to harass the refs, both from the bench, and from the stands. His favorite activity, though, was coaching and watching young people play inline hockey. Bill graduated in 1983 with a Bachelors of Science degree in Metallurgical Engineering from the University of Missouri - Rolla, Rolla, Missouri, and in 2001 with a Master of Arts degree in Management from Webster University, St. Louis, Missouri. He was a Registered Member of the Society for Mining, Metallurgy, and Exploration (SME), and was a recognized Qualified Professional (QP) Member with expertise in Metallurgy of the Mining and Metallurgical Society of America (MMSA). He was the President and CEO of Pennstrom Consulting, Inc., which he founded in 2001. He worked in the Mineral Processing Industry for more than 35 years. Bill was an incredibly generous, sweet, loving, brave soul, taken too soon. He will forever live on in our hearts.

William J. Pennstrom, Jr. of Highlands Ranch, Colorado passed away at his home, early Tuesday morning, January 31, 2017. Born on June 5, 1958, Bill was 58 years young. He was the son of the late William Joseph Sr and Joan (Bersch) Pennstrom. He... View Obituary & Service Information

The family of William J. "Bill" Pennstrom created this Life Tributes page to make it easy to share your memories.

Send flowers to the Pennstrom family.