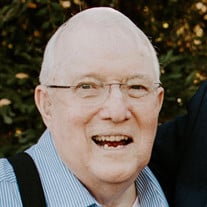 William Edgar Farrell beloved husband, Father, brother, grandfather and great grandfather passed away January 28, 2020 after a brief illness. Bill was born March 13, 1937 to Arthur & Lelia Farrell in Jeannette, PA. Bill, his older brother Charles and younger sister, Sandra, spent much of their youth moving across the country and back to Pennsylvania – more than 25 times before Bill turned 16. When Bill’s father died suddenly at age 47, Bill took on the role as caretaker for his mom and younger sister working full time while staying on track to graduate from State College High School in 1955. Determination and a sense of responsibility are hallmarks of Bill’s character. Bill was able to pay, not only for his own education at Penn State University, but also for his mother to receive both a BA and MA Degree – allowing her to have a career as a teacher and reading specialist. State College and Penn State University have been central players in Bill’s life. Bill received his B.A. from Penn State in 1959 and met his wife of 60 years, Sally Swing, at the University’s Creamery. Shortly after Bill’s graduation, he was standing in line at the Creamery when he heard someone calling out to him. It was Sally, who had met Bill through mutual friends, knew he had a car - as she was in need of a ride to a playhouse each week over the mountain. Although Bill and Sally were both dating other people at the time, during the course of their friendship, it became obvious they were meant to be together and on February 14, 1960 Bill proposed; they were married August 20, 1960. Bill began his career as a high school math teacher but, after applying for what he thought would be a summer job at IBM, realized the opportunities and stability he had not experienced as a child would be available to him with an IBM Career. Bill began work as a District Technical Rep, then became a Systems Engineer in Dover, DE calling on customers like Purdue Chicken. In 1972 Bill was transferred to Washington, D.C., where his responsibilities included calling on members of the US Senate and House, legislative assistants and senior government officials to sell the value of data processing as a national resource. In 1974 Bill became a Senior Planner conducting over 250 intensive planning sessions for both internal IBM teams as well as for US Government senior officials in the White House and NATO. In 1981 Bill was sent to Denver, Colorado as the account manager for IBM’s business with US West. US West’s business with IBM was less than $3 million in 1981, but quickly became one of IBM’s top 5 customers, with annual sales in excess of $150. Bill retired from IBM in 1991 and began a consulting career working with companies small and large in strategic planning, executive management, and in some cases acting as CEO. In 1993 Bill was selected by Colorado Governor, Roy Romer, to serve on the Colorado Commission on Information Management. A devoted member of the Christian Science churches wherever he lived, Bill served as First Reader, Board member, Sunday School teacher, Usher – whatever was needed. Bill’s additional board work included Wide Horizons, Amigos de SER Jobs for Progress, Rocky Mountain SER and Energaire Corporation. Bill was also very involved with the English Springer Rescue Association of Denver after he and Sally rescued “Lucky Willie Butler”. In 2012 Bill was inducted as a Penn State Alumni Fellow for his work with the University on several fronts including establishing a scholarship named for his mother (The Lelia Farrell Education Scholarship) as well as working closely with the University to bring in a “soft-box” for their Pole vaulting boxes after the tragic death of pole vaulter, Kevin Dare. Bill’s passions were family and flying as a private pilot. The family often spent time in the Cessna Skylane or Skylark flying between homebase in Delaware or Maryland and Ocean City, New Jersey, or into State College for Penn State football games. Bill is survived by his wife of 59 ½ years, Sally, his brother, Chuck (Constance) of State College, his daughters Wendy Witte (John) of St. Louis, MO, Tracy Jenkins (Stuart) of Goleta, CA, Rebecca Fletcher (David) of Littleton, Colorado, 4 granddaughters, Lindsey Heaberlin (Ryan), Jordan Jenkins, Sarah Fletcher, Dara Fletcher, Grandson J.J. Jenkins (Megan), and greatgranddaughter, Raegan Heaberlin. A service to celebrate Bill’s extraordinary Life – and the joy he expressed - will be held May 31, 2020 from 11:30-2 p.m. at Hudson Gardens in Littleton, CO. In lieu of flowers, donations in Bill’s honor can be made to the Lelia Farrell School of Education Scholarship at Penn State University or the Rocky Mountain Springer Spaniel Rescue. Mailed to: The Pennsylvania State University Office of Donor and Member Services 2583 Gateway Drive, Suite 130 State College, PA 16801 Reference: The Lelia Farrell Scholarship – SCEFL ESRA: https://englishspringerrescueamerica3.wildapricot.org/widget/Donate

The family of William E. Farrell created this Life Tributes page to make it easy to share your memories.

Send flowers to the Farrell family.