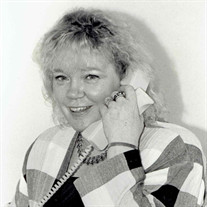 Wilma Lee Ross, 71, of Aurora, CO, passed away on October 22, 2020, surrounded by her family, into the waiting arms of Jesus. She endured a brave & bold journey through a cancer diagnosis, with successful treatment, yet faced many complications along the way. She was born to parents Ora J. Swoveland and Eleanor J. (Owens) Swoveland, on May 16, 1949, in Beatrice, NE. She grew up in Greeley, CO, and graduated from Greeley Central High School in 1967. She went on to study Business Administration, part-time, at Aims Junior College, while working full-time as a secretary for a few local businesses. In 1970, she went to St. Louis, MO, and completed training in Central Airlines School. While there, she was recruited by the local FBI Field Office. She returned home, and soon received an offer to work in the steno/secretarial pool at FBI Headquarters in Washington, D.C. So in early 1971, she packed up all her belongings, and boldly moved herself (& her Siamese cat, Nikki) across the country, where she knew no one, to begin her new adventure. Lee met Norman Kent Ross, an Aviation Electronics Technician in the US Navy, on October 8, 1971; and to him, it was love at first sight! They married a year later, and moved to Alexandria, VA. Their daughter, Patti, was born in August 1973, in Washington, D.C. In June 1974, Kent was discharged from the Navy, and they decided to return to Lee’s home state, so she requested & received a transfer to the Colorado branch office of the FBI. They packed up their little family, moved back to Colorado, and put down roots in Aurora. Lee continued working for the FBI, for about 2 years, eventually leaving for a more specific secretarial position with a local CPA/Law office. In early 1982, she was hired by a newly formed law firm, Burns & Figa, which eventually became Burns, Figa & Will, PC in 1991. She continued throughout those years, working primarily for Phillip S. Figa. Their work relationship & friendship was strong, solid & trustworthy. Lee had found her niche & excelled in her role so much so, that at one point, she was sought after by some other law firms & successful businesses in the area. But she enjoyed the professionalism and family feel, of BFW, and truly enjoyed being part of a reliable & successful team, with Phil, in his legal practice, as well as his various leadership roles around the community. In 2003, Phil was nominated by the President, to the US District Court for the District of Colorado. He asked Lee to be his Judicial Assistant, and she gladly accepted. And with that, she was back in the Federal system once again, bringing with her over 2 decades of legal experience, along with a strong talent for precision, organization & reliability. They enjoyed just over 4 years of continued work together, in the Federal Courts, before, to her heartbreak, the Honorable Judge Phillip S. Figa, passed away, due to a surprising and aggressive form of brain cancer. Lee continued as a Judicial Assistant in the Federal Courthouse, for 2 other judges, until her retirement in December 2014. Outside of work, Lee enjoyed spending time with her family, snuggling with her cats & dogs, reading mysteries and historical fiction, extensive traveling (including multiple trips to Europe, Hawaii, the Caribbean, & throughout the US), genealogy, and scrapbooking. The many scrapbooks she created over the past 20+ years, are beautifully personalized albums of her family life, their many travel adventures, all of her pets throughout the years, several books summarizing her daughter’s childhood, and elaborate spreads (throughout six full scrapbooks), documenting the life of her treasured granddaughter, Whitnee. These creative works of love, will certainly help our memories of her to live on! Thankfully though, the greatest treasure of all, is the knowledge that she had a personal relationship with her Lord & Savior, Jesus Christ. She met Him in her childhood, and walked & talked with Him, through all of her years. He made her strong, led her to love & care for others, gave her endurance & hope in life’s challenges, forgave her of her offenses, (as we ALL need), and was there at her final breath, to greet her face-to-face, and walk her into eternal life & peace in His Kingdom. This is our immense joy, even as we grieve! She had the following scripture written in her Pocket Planner, where she kept track of all of her doctor appointments, for this past year. It’s found in Jeremiah 29:11-12 (New Living Translation). “’For I know the plans I have for you,’ says the Lord. ‘They are plans for good and not for disaster, to give you a future and a hope. In those days when you pray, I will listen.’” Lee entrusted her life to the Lord, and on October 22, 2020, she received that promised future and hope! Lee is survived by her husband, Kent, of Aurora, CO; their daughter, Patti (Wayne) Sand, and granddaughter, Whitnee Sand, all of Centennial, CO; her mother-in-law, Martha Ross, brother-in-law, Michael Ross, and sister-in-law, Linda (Woody) Whittington, all of Ruston, LA; two nephews, a niece, and their families; and many cousins. She was preceded in death by her parents; a 1-day-old older sister, Wilanda Mae; and her father-in-law, Jack Ross. A Memorial Service is scheduled for Thursday, November 5, 2020 @ 2:00pm, at Southeast Christian Church, 9650 Jordan Rd, Parker, CO 80134. The service will also be available for livestream, or later viewing, through the Heflebower Facebook page. If you do not have a Facebook account, you can still view the live-stream by going to www.heflebowerfuneralservices.com and scrolling to the bottom of the page until you see the Facebook icon. When you click on that, you will be able to view the live-stream, without a Facebook account. In lieu of flowers, donations may be made in Lee’s honor, to St. Jude Children's Research Hospital. (www.stjude.org)

Wilma Lee Ross, 71, of Aurora, CO, passed away on October 22, 2020, surrounded by her family, into the waiting arms of Jesus. She endured a brave & bold journey through a cancer diagnosis, with successful treatment, yet faced many complications... View Obituary & Service Information

The family of W. Lee Ross created this Life Tributes page to make it easy to share your memories.

Send flowers to the Ross family.