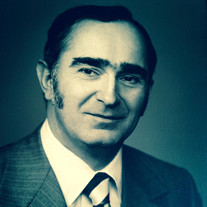 Thaddeus (Ted) A. Bohlen, 87, loving husband and devoted father passed away peacefully on November 12, 2015, in Denver, Colorado. Ted was born in Detroit, Michigan on August 1, 1928 to Maria and Leon Bohuszewicz. Ted grew up in Detroit during the Depression and persevered through many life challenges at a very young age. He had an incredible drive to lift himself out of his situation and he was focused on his education. He worked hard as a young man to help his family and to put himself into the best high school in Detroit. He graduated from Cass Technical High School and attended the University of Michigan, arriving on campus via bus with duffle bag in hand. He related this story to his children when he drove them to college with multiple loads of their belongings. He graduated from the University of Michigan with a Bachelor of Architecture in 1954 and went to work for General Motors. He decided to continue his education and started Law School in 1958, working days and going to school at night. In 1962, he graduated from Wayne State University Law School with honors and holds a Juris Doctor degree with distinction. Education defined Ted as he said that the only thing that no one can take away from you is your education. He stressed higher education with his children and all five graduated from college. He married his loving wife and “leader” Nancy Lu Huff on September 8, 1956, in Highland, Michigan and was the loving and proud father of five children: Terry, Tim, Sue, Todd and Shelley. While working at General Motors, he served as architectural liaison for the GM exhibit building for the 1963-1964 New York World’s Fair. He also served in the same capacity in the design of the corporate executive floor of the GM Building in New York City. When he retired from General Motors in 1987, he was Director of Human Factors, Safety and International Compliance. He was a registered architect in the state of Michigan and a member of the State Bar of Michigan. He was very active in the Boy Scouts of America, serving at the local level, as well as serving on the executive board of the Detroit Area Council. He received the Silver Buffalo, a national-level distinguished service award of the Boy Scouts of America presented for noteworthy and extraordinary service to youth on a national basis. All three of his sons are Eagle Scouts, his oldest grandson has achieved Eagle, and two more grandsons are on the trail to Eagle. Ted had many loves in life. First and foremost was his wife Nancy and his children. Then there was Boy Scouts. And then there was football - University of Michigan Football. Ted held season tickets at the Big House for many, many years and traveled to numerous away games including Rose Bowls in Pasadena. His children were raised on Michigan football and the maize and blue runs deep in their veins. Hail to the Victors! Ted also loved traveling and adventure. The family traveled extensively across the U.S. mostly inside one vehicle with infrequent stops prior to the destination. Many of the stories shared in the Bohlen family are about their road trips to Key West for Christmas and Des Moines for Thanksgiving. Then there was building his home. In 1981, Ted and Nancy purchased just over 7 acres in Plymouth, Michigan, near his beloved Alma Mater. Together with their children, they cleared the land and built their home, only contracting out the pouring of the foundation. (What a fun endeavor!) Besides the traveling stories, there are numerous accounts of the adventures of building his Shangri-la on Joy Road, his “Go Blue Ranch”. Ted was a brilliant man with a quick wit even as he suffered from Alzheimer’s. He was an incredible father who always put his family first, loved to laugh, loved the outdoors, loved sharing meals with family and friends and taking photos of those events. He was an animal lover. He lit up a room with his presence. He will be forever missed but forever in our hearts and living on through his family. Ted was preceded in death by his mother Maria and father Leon, his brother Charles and his sister Donna. He is survived by his loving wife Nancy, his children Terry Bohlen and his wife Julie; Tim Bohlen; Sue Butler; Todd Bohlen and his wife Lori; Shelley O’Neill and her husband Tim; and his grandchildren Alexander and Adrianne Bohlen; Sarah and Dylan Butler; and Cullen and Cameron O’Neill. Further survived by his sister Lucy and brothers- and sister- in- law, nieces and nephews, extended family and friends. A celebration of life service will be held on Saturday, November 21, 2015, from 10:00 AM -1:00 PM at the University of Michigan Union, Pendleton Room in Ann Arbor, Michigan. A special remembrance time will take place at 11:00 AM. In the true tradition of tailgating on a Michigan football Saturday, there will be a continental breakfast buffet beginning at 10:00 AM. Internment at Highland Township Cemetery, Highland, Michigan. Memorial donations can be made to the Boy Scouts of America, Michigan Crossroads Council, D-bar-A Scout Ranch Camp Stewards, 137 Marketplace Blvd., Lansing, MI 48917. The family extends a special thank you to Life Choice Hospice of Colorado for their loving care and support, especially in his final days.

Thaddeus (Ted) A. Bohlen, 87, loving husband and devoted father passed away peacefully on November 12, 2015, in Denver, Colorado. Ted was born in Detroit, Michigan on August 1, 1928 to Maria and Leon Bohuszewicz. Ted grew up in Detroit during... View Obituary & Service Information

The family of Thaddeus A. (Ted) Bohlen created this Life Tributes page to make it easy to share your memories.

Send flowers to the Bohlen family.