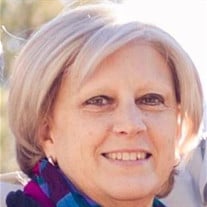 Teresa Ellen (Griffin) Kennedy, 61, of Littleton, CO, passed away on January 2, 2018 at Swedish Medical Center, after a long and courageous battle with cancer. She was the wife of David Kennedy for 27 years. Born on April 12, 1956 in Hays, Kansas to David and Barbara Griffin, she was the oldest of three children. She attended Barnes Business School and went on to work for Duncan Oil, then for Kennedy and Mitchell and then at Mile High Oil and Gas. It was at Mile High that she met David Kennedy and on May 12, 1990 they would marry at Hosanna Lutheran Church in Littleton. In that same year David and Teresa formed Columbine Valley Corporation and there they have worked together for the past 27 years. Her faith and love for Christ was a huge part of her life; Teresa was a member of Ascension Lutheran Church and attended Community Bible Study during the week. She loved to spend time with her family and friends. She loved to travel and while she grew up in landlocked states, she had a deep love for the ocean. She loved to walk along the beach and soak in the sea air. She always had a passion for sewing; while growing up she participated in 4H and sewed many beautiful pieces of clothing including her prom and wedding dresses. She helped make many banners that were hung in at Hosanna Lutheran while in attendance there. Later her love of sewing turned to quilting. She enjoyed the challenge of piecing fabric together to make something beautiful. Surviving Teresa is her husband, David; their children Josh and Erin Kunkel, Danielle Kunkel, Jon and Laura Kennedy and Ben Kennedy; grandchildren, Benjamin Kennedy, Andrew Enge, Jonathan Kennedy Jr, Isabella Kennedy, Allison and Mackenzie Kunkel, her parents, David and Barbara Griffin; brothers Dave (and Cheryl) Griffin, Tim (and Lorie) Griffin; a host of family and friends that loved her and will miss her dearly. Teresa’s service will be held on Monday, January 8th at 12:30pm at Ascension Lutheran Church (1701 W Caley Ave Littleton, CO 80120). Reception to follow at the church and then a graveside burial will be held at 3:30pm at Seven Stones Cemetery (9635 N Rampart Range Rd Littleton, CO 80125). Memorials may be directed to: The Kennedy Center for Hope c/o Kennedy Foundation 8955 Ridgeline Blvd. Suite 2000 Highlands Ranch, CO 80129 Hana’s Hope (http://hanashope.org/) The Kennedy Foundation assists the homeless, Hana’s Hope provides wigs to cancer patients.

Teresa Ellen (Griffin) Kennedy, 61, of Littleton, CO, passed away on January 2, 2018 at Swedish Medical Center, after a long and courageous battle with cancer. She was the wife of David Kennedy for 27 years. Born on April 12, 1956 in Hays, Kansas... View Obituary & Service Information

The family of Teresa E. Kennedy created this Life Tributes page to make it easy to share your memories.

Send flowers to the Kennedy family.