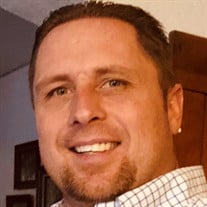 Terence David Hopkins, "Terry", "T", 41 of Aurora, Colorado, passed away January 8, 2019. Memorial Services are in The Grove at Mission Hills - Please enter from the north parking lot - There is an Entrance Sign. Terry was born November 14, 1977 in Aurora, Colorado to Terence Ray and Sue Schlehuber. Terry worked for his best friend Joe Rae at Tri-County Pest Control at the time of his death. He grew up with his cousins, seeing them often and loved playing with them, teasing and joking with them. Terry worked at helping his grandfather with the family roofing business. He loved the Broncos, even on their bad days. He was also a baseball fan and played from when he was young through high school. His grandfather who had coached baseball for many years and watched a ton of ballplayers said he had the best eye-hand coordination he had ever seen. He enjoyed getting to know his half brother Alec over the years via texting and calling. Terry enjoyed spending time with his family and his girlfriend Dana. They were planning a future together. Terry is survived by his Mother-Sue Lundy, Stepfather-Larry Lundy Father-Terence Ray Hopkins, Stepmother-Maria Hopkins;Girlfriend - Dana Lucero; Maternal Grandparents: Dag and Neda Schlehuber; Half brother-Alec Hopkins; Aunts, Uncles and Cousins - The Huter Family - Dave, Julie, TJ, Natalie and Forrest (Brink) The Schlehuber Family - Tim, Pam, Jared, Jenna, Jordan The Parker Family - Don, Daneda, Travis, Taylor, Tori Uncle Tom Hopkins, Tim Hopkins; Friends - Joe and Natica Rae, Mike and Laura Luckett, along with numerous other friends. He is preceded in death by;Paternal Grandparents - Ray and Maxine Hopkins Uncle - Gary Hopkins, Cousin - Pat Hopkins. Reception to follow: Tuesday, January 15, 2019 Heritage Greens Clubhouse 4814 E Links Cir, Centennial, CO 80122 Terry’s final rest place will be at The Lutheran Church by the Lake in McCormick, South Carolina. In Lieu of Flowers memorials are suggested to: St Jude Children’s Research Hospital https://www.stjude.org/donate/donate-to-st-jude.html “It makes such a difference,” said Pooh, “To have someone who believes in you.” ---Winnie the Pooh Believe in yourself

Terence David Hopkins, "Terry", "T", 41 of Aurora, Colorado, passed away January 8, 2019. Memorial Services are in The Grove at Mission Hills - Please enter from the north parking lot - There is an Entrance Sign. Terry was born November 14,... View Obituary & Service Information

The family of Terence David Hopkins created this Life Tributes page to make it easy to share your memories.

Send flowers to the Hopkins family.