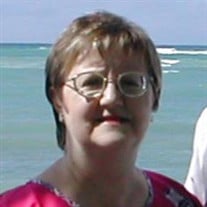 Susan (Gasso) Goodman, age 71, died on April 23, 2020, in Parker, CO. She was the elder daughter of Frances and Joseph Gasso, who preceded her in death. Sue was born in Bridgeport, CT and raised in Southern California. Sue was a Registered Nurse and Licensed Social Worker. She was a Peace Corp volunteer in a rural area of the Philippines, and served in the US Navy Nurse Corps. She lived for a time in Japan and taught at the University in Yokohama. While there, she fell in love with the country and the people. When she lived in Denver, CO, she created a position of Health Coordinator at the Asian/Pacific Development Center. Sue lived for many decades on Oahu, HI, working with Asian refugees, immigrants, homeless veterans, and the Hawaiian community. She was the statewide trainer for Healthy Start homes visits for neglected/abused children. Sue retired from the Hawaiian Department of Health-Adult Mental Health Division where she was a Quality Assurance Clinical Auditor. After she retired, she briefly relocated to the Pacific Northwest on the mainland and recently moved to Colorado to be closer to family and friends. Sue loved to travel and did so extensively throughout the Pacific, Europe and Africa. She volunteered at Mother Theresa's mission in Calcutta, India, spent her 50th birthday in a castle in Ireland, and volunteered at an AIDS hospice in Johannesburg, South Africa. A Buddhist for many years, Sue's ashes along with her deceased canine companions will be returning to her favorite temple, Engakuji Temple in Kamakura, Japan. Per Sue's request, no services were held. She requested that any donations made in her name should be directed to Doctors Without Borders, UNICIF, or your local Humane Society. Sue is survived by her sister Michele Ward of Parker, CO, nieces Samantha Venetucci and Megan Ortiz of Denver, CO, and Shayna Ward of Parker, CO, and nephews, Sean Thomas of Riverside, CA and Chris Ward of Castle Rock, CO, and by great niece Ava Ortiz and great nephews Logan Ward and Joseph Thomas, and her beloved canine companion, Musubi. Sue will be missed by her family and all of the many friends she has made around the world.

Susan (Gasso) Goodman, age 71, died on April 23, 2020, in Parker, CO. She was the elder daughter of Frances and Joseph Gasso, who preceded her in death. Sue was born in Bridgeport, CT and raised in Southern California. Sue was a Registered... View Obituary & Service Information

The family of Susan Goodman created this Life Tributes page to make it easy to share your memories.

Send flowers to the Goodman family.