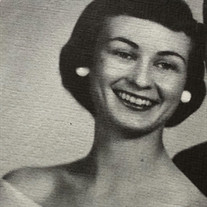 Ruth Frances Hanna Leisle, a mother and grandmother, age 83 of Littleton, passed away on Saturday, April 6, 2019 in Littleton. Ruth is survived by her son Steven of Silverton, Colorado; her daughter Pamela of Durango, Colorado; son Daniel and his wife Leigh of Ponte Vedra Beach, Florida; son Scott of Littleton, Colorado; grandson Nicholas of Chicago, Illinois; and grandson Michael currently attending the United States Military Academy at West Point. Ruth was born in Spokane, Washington to Margaret and Ralph Hanna. Early in her life the family moved to Millbrae, California and Ruth graduated from Burlingame High School in Burlingame, California. After High School, Ruth attended Whitman College in Walla Walla, Washington where she graduated with a Bachelor of Arts of Education and Psychology. While at Whitman, Ruth studied in Hawaii for a semester, and was a very involved member with the Delta Delta Detla Sorority. While her children grew up partially in Littleton and in Montville, New Jersey, her dedication to the children was seen through her numerous hours spent at the schools, being a den mother for Cub Scouts, and helping out with many youth sports teams including organizing tennis teams at the Lake Valhalla Club in Montville. While in Montville, Ruth enjoyed getting out on the tennis courts with her friends from Lake Valhalla. After the children all left the house, Ruth thoroughly enjoyed her years working at Macy’s. In addition, throughout her life, she enjoyed always spending time with her cats. A celebration of Ruth’s life will be held in California this summer with her family. In lieu of flowers, tributes to Ruth may be made by donating in her name to one of your favorite charities. Thank you.

Ruth Frances Hanna Leisle, a mother and grandmother, age 83 of Littleton, passed away on Saturday, April 6, 2019 in Littleton. Ruth is survived by her son Steven of Silverton, Colorado; her daughter Pamela of Durango, Colorado; son Daniel and... View Obituary & Service Information

The family of Ruth Frances Hanna Leisle created this Life Tributes page to make it easy to share your memories.

Ruth Frances Hanna Leisle, a mother and grandmother, age 83 of...