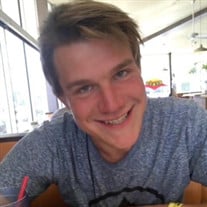 Rowan “Hunter” Huffstetler, 23, lived his life outside the box and on his own terms. The son of Elizabeth (Betsy) Blake Huffstetler and Kenin Roy Huffstetler, he passed from this earth on Wednesday, February 17, 2021 in Denver, CO. Born in Charleston, SC, on March 3, 1997, Hunter lived in several states but spent 15 years in the Denver metro area. A precocious child, Rowan was known for his intelligence, quick wit, imagination and amazing heart. A favorite memory, a family member shared that while on family vacation around 2003 in Galveston, Hunter was the life of the party to the delight of all the adults, as he recounted the plot and every detail from the Harry Potter novels he had recently read. She remembers thinking that most children his age were still learning to read and he had not only read, but retained, the nuances of the story. Talking with Hunter was always like talking to a little adult. He was very wise to things that most children would never notice. Another family member remembers him as very sweet, bright and active with an insatiable thirst for knowledge. When he was in first grade, he tried to impress his new teacher – and succeeded – by telling her that he knew the function of the medulla oblongata and that he was happy to explain it if she needed him to. Hunter had the biggest heart and this was both his most special quality and biggest burden. The people he loved, he loved fully, completely and without reservation. He was a champion of the underdog and wanted to see those around him succeed, even when he could not. He gave of himself freely; his time, his experience, words of encouragement and even wisdom. He knew what needed to be done, even if he could not do it himself. More sensitive to disappointments and hurtful words than most, he searched for acceptance, belonging and an escape to his pain and clung to those who were able to provide that for him. Rowan found comfort and solace in the people he met on the streets, the ones who accepted him for who and what he was at any given moment. Hunter is survived by his parents, brother, Patrick Huffstetler and his sisters Jena Huffstetler, Heather Smith and Alyssa Smith along with his grandparents and numerous aunts, uncles and cousins. Hunter wouldn’t stand for being in a box so his remains will be cremated and a memorial service will be held later in the year. Please consider a donation in Hunter’s name to Sox Place, a drop-in center that provides assistance to homeless youth, the Colorado Coalition for the Homeless or Volunteers of America.

Rowan &#8220;Hunter&#8221; Huffstetler, 23, lived his life outside the box and on his own terms. The son of Elizabeth (Betsy) Blake Huffstetler and Kenin Roy Huffstetler, he passed from this earth on Wednesday, February 17, 2021 in Denver,... View Obituary & Service Information

The family of Rowan Hunter Huffstetler created this Life Tributes page to make it easy to share your memories.

Rowan “Hunter” Huffstetler, 23, lived his life outside the box...

Send flowers to the Huffstetler family.