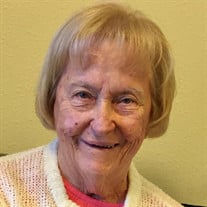 Rosalyn “Rodi” (Morefield) Eberspacher, formerly of Seward County, Nebraska and Mesa, Arizona passed away Thursday, September 19, 2019, in Highlands Ranch, Colorado at the age of 93. She was born in her parents' home in Milford, Nebraska on February 5, 1926 to Frank and Clara (Miller) Morefield. She graduated from Milford High School and then attended secretarial school in Lincoln, Nebraska. She became the secretary and later office manager for the John Hancock Company in Lincoln for nearly 30 years. She and her husband Ray Eberspacher were married for almost 50 years, and spent many of those years at the Towerpoint Resort in Mesa, Arizona. Rodi gave birth to two daughters, Cheryl (Sherry) and Carol. Unfortunately, Carol only lived for one day, but Rodi was able to enjoy the remainder of her life with Sherry as her loving daughter, and also later as her devoted companion and caregiver. Rodi played the organ and piano for special events, programs, and for her church, Salem United Methodist, near her farm in Nebraska and later in Mesa, Arizona. Anyone that knew her recognized her gift, love and talent for music. It was part of her soul. Even in her much later years, she was astonishingly able to play many songs and hymns. Along with playing the piano and organ, Rodi enjoyed playing recreational and competitive tennis for years. She also taught fitness classes, went swimming, and rode her bicycle in Mesa, Arizona. After moving to assisted living in Colorado, she continued to remain very active with other people playing games and participating in sing-alongs and many other activities. She loved God and her family and friends. Rodi is survived by her daughter, Sherry Flohr, of Castle Rock, Colorado; grandson, Cory Flohr and his wife Dawn, of Parker, Colorado; granddaughter, Carrie Nickoloff and her husband Mark, of Thornton, Colorado; great-grandchildren Tanner Nickoloff, Jake Nickoloff and Madison Flohr. She was proceeded in death by her parents Frank and Clara (Miller) Morefield, daughter Carol, and husband Ray Eberspacher. In lieu of flowers, the family would appreciate personal stories and memories of Rodi, or donations in her name to cancer research and treatment, or the Milford, NE High School. Please forward personal stories and memories to [email protected]

Rosalyn &#8220;Rodi&#8221; (Morefield) Eberspacher, formerly of Seward County, Nebraska and Mesa, Arizona passed away Thursday, September 19, 2019, in Highlands Ranch, Colorado at the age of 93. She was born in her parents' home in Milford,... View Obituary & Service Information

The family of Rosalyn "Rodi" (Morefield) Eberspacher created this Life Tributes page to make it easy to share your memories.

Send flowers to the Eberspacher family.