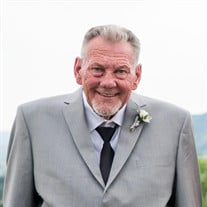 Ronald Lawrence Dierenfield, age 70, met Jesus peacefully at 11:25am at Rose Medical Center in Denver on October 10, 2021 after a valiant battle with Covid-19. Ron was born November 3, 1950 in Cody, WY to Howard and Mary Agnes Dierenfield and raised in Billings, MT. He graduated from Billings Catholic High School in 1968. He met the love of his life, KC (legal name Carol) Freeman in October 1971 at Sambos restaurant where Ron was an Assistant Manager and KC was a Waitress. Ron (age 21) and KC (age 18) were married on August 19, 1972 in Chicago. After moving to Billings, Montana in 1979, Ron worked as a bricklayer for many years. Ron and his family moved to Englewood, Colorado in 1988. Ron started work as a Carpenter at Omni Building Corporation in 1988, was promoted to Project Manager and then Vice President of Operations. Ron became a follower of Jesus on November 13, 1981. God healed his marriage in 1985, and as a result, they committed the rest of their lives to help other couples reconcile their marriages. In 1994, Ron and KC became Certified Christian Conciliators (mediation-reconciliation). That passion to help others grew into a ministry at Mission Hills Church called PeaceBuilders from 2008-2010. In 2011 God called Ron and KC to full time ministry. Reigning Peace Ministries was formed that same year for the purpose of biblical counseling and conflict reconciliation, which continues to thrive to this day. Ron enjoyed spending as much time with his family as he could. Ron would often be found on the sidelines watching his grandkids play sports, enjoyed fishing, hunting and watching UFC fights with his sons. He was also huge Denver Broncos fan. Ron also served his community as a soccer referee, victim advocate for Jefferson County and spent seven years feeding the homeless in the heart of downtown Denver weekly. He also served Mission Hills Church as an Elder for at least two terms and loved holding babies in the nursery. He is survived by; his wife KC, his two brothers Ken (Donita & family), Duane (Teri & family), his three sons, Rich (Becki), Chris (Angie), Spencer (Sarah), and 6 grandchildren, Mason (16), Katelyn (15), Caleb (11), Logan (10), Grace (9) and Oliver (6). A public visitation will be held on Wednesday, October 20th at 6:00pm at Heflebower Funeral & Cremation Services, 8955 S Ridgeline Blvd #100, Highlands Ranch, CO 80129. Please feel free to stop by and share in the laughs, memories and reminiscing. Ron’s family will be holding a Celebration of Life Service at Mission Hills Church, 620 SouthPark Dr., Littleton, CO 80120 on Thursday, October 21st at 11am with a reception to follow.

Ronald Lawrence Dierenfield, age 70, met Jesus peacefully at 11:25am at Rose Medical Center in Denver on October 10, 2021 after a valiant battle with Covid-19. Ron was born November 3, 1950 in Cody, WY to Howard and Mary Agnes Dierenfield... View Obituary & Service Information

The family of Ronald Lawrence Dierenfield created this Life Tributes page to make it easy to share your memories.

Send flowers to the Dierenfield family.