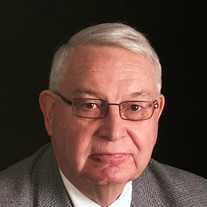 On Monday, November 18, 2019, Roger Stewart Johnston passed away with a smile on his face while watching football. Roger was born in Lincoln, Nebraska on August 26, 1939 to parents, Stewart and Elizabeth Johnston. He has two siblings, Calvin and David and nieces and nephews. Roger is survived by his wife of 55 years, Jane, sons Paul (Paula) and Robb (Amy) and two grandchildren, who lit up his life, Evan and Avery. Roger, a Nebraska native, received his BS in Civil Engineering in 1961 from the University of Nebraska in Lincoln. He was involved in the construction engineering industry, which he LOVED, for over 50 years. He started his career working for the U.S. Forrest Service in Glenwood Springs. There, he met Jane in 1962 on a blind date. After a year courtship, he proposed to Jane over dinner and they married 1964. Paul came along in 1967 and then Robb in 1969. After the U.S. Forest Service, he worked with Hensel Phelps, McNamara, and Kiewit. He also held engineering management positions over the years with Aluma Systems, Patent Construction Systems, and Harsco Infrastructure. Roger was a mentor to many young engineers and had a strong bond with his west coast associates. He retired from Harsco in 2012, ending his 13 year service as Director of Engineering. Early in Roger’s career, he had worked with several large heavy construction contractors on dams (e.g., Flaming Gorge and Oroville Dams), locks, powerhouses, and bridges. His vast knowledge and experience in the industry led to the pioneering of the monolithic forming and placement of concrete turbine-generator pedestals. In 2011 he was bestowed the honor of “Fellow” for the American Concrete Institute (ACI). A Fellow is a person who has made outstanding contributions to the production or use of concrete materials, products, and structures in the areas of education, research development, design construction or management. He finished his career at Crimson Engineering Associates, Inc. as a consultant, living in Highlands Ranch with Jane. He loved spending time with his kids (Robb & Amy and Paul & Paula) and grandkids (Evan & Avery), reading, traveling and taking in the fresh mountain air from the cabin outside of Oak Creek, Colorado. We will miss him immensely, but know he is always with us in our hearts!! Memorials are suggested to www.acifoundation.org

On Monday, November 18, 2019, Roger Stewart Johnston passed away with a smile on his face while watching football. Roger was born in Lincoln, Nebraska on August 26, 1939 to parents, Stewart and Elizabeth Johnston. He has two siblings, Calvin... View Obituary & Service Information

The family of Roger S. Johnston created this Life Tributes page to make it easy to share your memories.

Send flowers to the Johnston family.