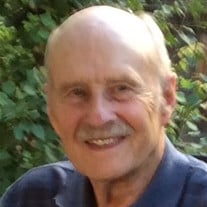 Bob was born on September 21, 1935 in Goessel, Kansas. He was raised on a farm near Canton, KS with his older sister and three younger brothers. After graduating from Kansas State University with a degree in Mechanical Engineering in 1958, he was offered a job in Denver with the Glenn L. Martin Company, which today is known as Lockheed Martin. Just before his starting date, he was drafted into the Air Force. He attended three months of basic training, but was permitted to serve in the Reserves for the next eight years as part of the military’s “Critical Skills” program. Bob met his wife, Heidi at the Martin Company where she worked as a secretary. They were active in the Martin ski club together and eventually married on May 22, 1965 In Denver. They had two children, Julie and Jeff and were blessed with five grandchildren. While at the Martin Company, Bob was responsible for the stress analysis group and structural test activity on the Viking Program, the development of an Expandable Space Station, stress and dynamic analysis during the structural design phase on Titan I, Titan II and Titan III vehicles, and development of the Manned Maneuverable Unit. He left Martin for a 5 year period, working for ARCO Solar where his team designed, tested and built large solar photovoltaic and reflector concentrator fields for commercial solar use. He returned to Martin until his medical retirement in 1992, due to extensive heart problems. Bob was an active outdoors person who loved camping, fishing, hiking, hunting, waterskiing, and was a certified ski instructor. He enjoyed time with his family and friends, and was active at Cherry Hills Community Church for over 35 years. Bob passed into God’s loving arms on March 19, 2017, and is survived by his wife, Heidi, daughter Julie, son Jeff, daughter-in-law Amy, and grandchildren Nathan, Aaron, Ella, Megan, and Madison. He is pre-deceased by his parents and his son-in-law, Steve. His body has been interred at Chapel Hill Cemetery in Littleton. Bob’s gentle, Christ-like character has been a huge influence on his children and grandchildren, and his kindness, generosity and loving nature will be missed by all who knew him.

Bob was born on September 21, 1935 in Goessel, Kansas. He was raised on a farm near Canton, KS with his older sister and three younger brothers. After graduating from Kansas State University with a degree in Mechanical Engineering in 1958,... View Obituary & Service Information

The family of Robert Thomas created this Life Tributes page to make it easy to share your memories.

Send flowers to the Thomas family.