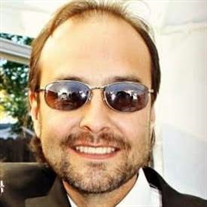 On Friday, January 22nd, 2021, Robert William Sanchez, grandfather, father, son and brother, passed away suddenly at the age of 58 years. Robert will be lovingly remembered by his parents Robert Hernandez Sanchez Jr. and Lorraine Brewer; his daughters Shalane Adrian, Sharina Heiney and Sharyce Herman. Robert will also be fondly remembered by his four grandchildren Morgan, Paige, Alexander and Axel; by his brother Chris Roberts and by his sisters Lisa Beam, Deanna Seery, Crystal Schuh and Erica Shine. Robert will also be forever remembered by numerous nieces, nephews and extended family and dear friends. Robert was predeceased by his brother Eddie Sanchez. Robert went to Morris County Community College in New Jersey then finished out his college years in Denver, Colorado with an EKG Technician certification. After college he worked as a security guard at Hertz Rental Car where he met his future wife Mary Lou Sandoval. He married Mary Lou on December 30, 1983. Robert welcomed with open arms a stepdaughter Chrissy Edwards and a stepson Toby Martinez. Robert and Mary Lou then had three daughters Shalane Adrian, Sharina Heiney and Sharyce Herman. Robert developed his enthusiasm for travel early-on in life, pouring over maps on how he could travel to see his family across the united states, as family was very important to Robert. He also loved taking his family camping, dredging and sightseeing as they traveled through the states. Robert loved making memories with his family, as it was something he could always cherish. He was also a foodie; he loved to grill and bake any kind of dessert you could think of. Robert cherished his family very much and always wanted to help in any way he could. No matter the situation, he was always there to help. Robert lived passionately in the wilderness, that was where his heart was. He would hunt with his son-in-law Ryan, engaging in the most off the grid hunts of a lifetime. Robert also enjoyed fishing and going to the gun shows with his other son-in-law Nick. Robert also enjoyed going on motorcycle rides with his son-in-law Josh. They would meet up at the movies then follow-up with dinner. Our grief is tempered by memories of Robert’s amazing strength and spirit. Robert's legacy will continue to serve as an example of how to live a committed and engaged life. Robert is survived by his ex-wife Mary Lou Sandoval, daughter Shalane and her husband Ryan Adrian and two granddaughters Morgan and Paige Adrian; daughter Sharina and her husband Josh Heiney and grandson Axel Heiney, plus baby on the way; Sharyce and her husband Nick Herman, and grandson Alexander Herman; step son Toby Martinez, and two grandsons Toby and Alonzo Martinez, and granddaughter Sabrina Martinez; Chrissy and her husband Chris Edwards, and granddaughters Kristen and Michaela Edwards; father Robert and stepmother Debbie Sanchez; mother Lorraine Roberts; stepfather Ken Roberts; brother Chris Roberts and his wife Michele Odorizzi-Roberts, and nieces Kirsten and Hannah Roberts, niece Kerilyn Semerarro, nephews Justin and TJ Klamerus; sister Lisa and her husband Brian Beam, nieces Brianna Ford, Chloe and Bridget Beam; sister Deanna and her husband Jeff Seery, nephew Grayson Seery; sister Crystal and her husband Bill Schuh, nephews Lance and Logan Zima, nephew Erik Schuh and niece Emily Schuh; sister Erica and her husband Tony Shine, nephews Joseph Michael DiMarco and Max Shine, and niece Annalise Shine. Predeceased by his brother Eddie Sanchez, leaving behind nieces Anna Sanchez, and DeAnne Sanchez and nephew Christopher Sanchez “Do not fear death, but rather the unlived life. You don't have to live forever. You just have to live.” Natalie Babbitt

On Friday, January 22nd, 2021, Robert William Sanchez, grandfather, father, son and brother, passed away suddenly at the age of 58 years. Robert will be lovingly remembered by his parents Robert Hernandez Sanchez Jr. and Lorraine Brewer; his... View Obituary & Service Information

The family of Robert William Sanchez created this Life Tributes page to make it easy to share your memories.

Send flowers to the Sanchez family.