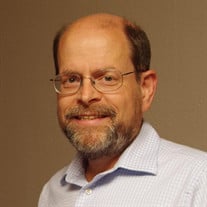 Dan Harder, of Sedalia, Colorado, faithful and loving husband, father, son, brother, uncle and nephew, passed away Thursday, July 29, 2021 from an unexpected complication while undergoing a stem cell transplant for treatment of leukemia. He was 52. Dan entered this life on September 15, 1968, the third of three boys born to Dean and Doris Harder. Growing up in Littleton, Dan attended Littleton Public Schools. Dan dedicated his life to the Lord at a young age, and was active in church activities. Dan was a talented performer and loved speaking and singing. He performed in plays and musicals, played saxophone in the band, and played piano and sang with a barber shop quartet with friends at church. Dan also had a keen interest in electronics and sound, assembling all manner of gadgets from power supplies to motion sensors to speaker enclosures, and ran sound for church services and productions. Dan graduated from Heritage High School in 1987 and attended Colorado Christian University before transferring to ITT Technical Institute, where he graduated with honors in 1990. Dan subsequently earned a Bachelor of Science degree from University of Colorado at Denver in Music Engineering in 1996. Dan went to work for KWBI radio in Denver, where he utilized his technical expertise in broadcast engineering and his vocal talent as an on-air personality. In 1998, Dan met the love of his life, Amy Vaughn. Dan proposed as the ball dropped at midnight on January 1, 1999, and they were married in Littleton on May 15, 1999. Abby was born to Dan and Amy in Littleton in 2001. When many positions were cut from KWBI, the family moved to Lubbock, Texas, where Dan assumed engineering duties at a radio station covering much of west Texas. While there, Dan and Amy welcomed Zach to the family, born in 2002. Dan's love for his children was evident through the many activities he enjoyed with them, spending time with them on hobbies, sledding, bike rides, music, Awana pinewood derbies, and church activities. In late 2003, the family moved back to Colorado where Dan took a position as Chief Engineer with KPOF Christian radio. Over the years, Dan worked on everything “from microphone to antenna” he would sometimes say. He could do it all, and was instrumental in transitioning KPOF to be the first HD radio station in Colorado. Dan touch thousands of lives running the Kids Point kids program on Saturday morning, including broadcasting the birthday club, announcing young listeners' birthdays on the air. He would include his nieces and nephews, mailing them a birthday postcard reminding them to tune in online to hear their uncle wish them happy birthday. Dan fulfilled a dream of doing commercial voiceover work when he started “VO4U.com” in 2007, transitioning eventually to part time status at KPOF. Over the years his voice has appeared in videos, training and promotional materials for companies large and small across the country, including one video featured on a TV talk show. The family moved to the mountains west of Sedalia in 2017, and Dan loved waking up to fresh air and pine trees, tending chickens and turkeys, hiking with the family, and romping with their dogs Ranger and Bryleigh. Dan was diagnosed with Leukemia in July of 2020. Throughout this challenge, Dan's attitude, smile and testimony was a reflection of his belief in God, his conviction that his life was in God's hands, and the power of the prayers of his family, friends, and the church. Dan entered the gates of Heaven the morning of July 29, 2021, free from the leukemia that had challenged him for over a year. Dan's mother Doris Harder met him there. Dan leaves behind his loving wife of 22 years Amy, daughter Abby and son Zach, father Dean and wife Judy, brother Dean and wife Tammy, brother Dave and wife Lou Ann, foster brother Ziggy and wife Jess, one niece, 4 nephews, aunts, uncles and cousins. In lieu of flowers, the family requests donations to the Dan Harder Memorial fund in care of Wells Fargo Bank.

The family of Robert Daniel "Dan" Harder created this Life Tributes page to make it easy to share your memories.

Send flowers to the Harder family.