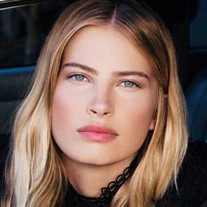 Peyton Aurora Linafelter was born on April 28th, 2000 and in the early hours of November 24th, 2020, left this earth as quietly and peaceful as the snowflakes that were falling out of the sky. Peyton is survived by her Mother Tera Lynn Gharrity, Stepfather Christopher Theodore Gharrity, Stepbrother Griffin Douglas Gharrity, Stepsister Hannah Setterquist Gharrity, Step Grandmother Ann Janet Gharrity, and her devoted bedside dogs, Hurley & Apple. Her Aunt Amy Marie Gerk, cousins Alyssa, Addison, & Lincoln, Grandmother Jane Amy Schroeder and Step Grandfather John Schroeder, Grandfather Gregory Allen Gerk and Step Grandmother Kathy Gerk, Great Grandmother Lois Marie Gerk, along with numerous Aunts, Uncles, and cousins throughout the Gerk/Allmann/Gharrity family tree. She is also survived by Uncle Rodney and Aunt Stephanie Linafelter, cousins Chelsea, Andrea, Lexi, & Grace, Godparents Uncle Dwight and Aunt Bev Sporrer, Uncle Ryan and Aunt Tara Niesent, cousins Rylee, Regan, & Ryder, Aunt Nikki Oliver, cousins April & Austin, Grandfather Marland and Grandmother Seanna Linafelter, Grandfather Randy Shank, Great Grandmother Florence Shank, father Wade Ashley Linafelter and numerous other Aunts, Uncles, and cousins of the Linafelter/Sporrer/Shank family tree. She is further survived by everyone who loved and cherished her. She is preceded in death by her Great-Grandparents Alfred and Lorina Allmann, and Great-Grandfather Sylvester (Wes) Gerk. Peyton was not your average person. At two and half years old, she rode her Yamaha PW 50 dirt bike around the neighborhood and by three years old, with her blonde pony tails under her helmet, she graduated to a dirt bike track with racers three times her age. By four, she was fearless and jumping off ten-foot rocks to see if she could stick the landing. At 6, after a long day of riding her KTM 65, she rode right into the side of a friend’s truck. Hard. Despite what should have been her first ER visit, she bounced up, did the “hokey pokey” to show she wasn’t injured, and asked if she could still go ride with her Dad on the “Big Track” before heading home. At her 8th birthday party, she was accidently struck in the mouth and nose with a baseball bat but refused to go the hospital. During her first ski trip, she did not think she needed lessons and went straight to the lift having no idea what she was doing. On her descent, after taking out 2 instructors and a quite a bit of snow fence, she had to be strapped down to the Medics sled to keep her from heading down the mountain on her own again. After another round of “hokey pokey” at the bottom of the slope (and perhaps a slight concussion), the Ski Instructor realized Peyton wasn’t going to stay sitting in the lodge, so they promptly took her to the other kids getting lessons hoping she’d stay in the group this time. This extreme tolerance and indignation towards pain was her strongest asset. As in the rest of her life, people naturally gravitated towards Peyton because of her independent, fearless, and tough exterior, but they stuck around because of her immense inner beauty. Everyone, even animals, felt better being in her presence. She was truly a “pet whisperer” and every morning on her walk to school, Gabby, the neighborhood wild Turkey would accompany her to school and then would faithfully wait in the afternoons and run towards her at first sight to walk her home. Everywhere she went, dogs would come and lie on her or lean against her. With her bold blue eyes, she would light up a room with her big natural smile and quick wit. Possibly her greatest gift was her kind, loving, and inviting personality, making everyone around her relaxed and welcome. Nobody left her company without being better for it. Peyton was diagnosed with Stage IV Ovarian Cancer on her 16th birthday and in only the way she could, went to absolute war with cancer. In so doing, she taught the world how to fight with poise, humor, and grace. She was brave and strong and absolutely resilient in her fight. Never backing down and never once complaining or asking, “Why me?”, but instead, “Watch this”. Her strength and determination never once faltered. Becoming a professional model months after being diagnosed, she used her platform to show the beauty of her scars, port, chemotherapy, cold caps, radiation, allergic reactions, and infections during her fight to live. And live she did. Winning an Emmy for her commercial for UCHealth, gracing multiple magazine covers, being the campaign face of Anastasia in Sephora worldwide, personally inspiring Cara Delevingne for Izzy’s character in “Life in a Year” while assisting on set and taking over Directing for one scene (thank you Russell for listening and giving her that opportunity), moving to Mexico City without speaking a word of Spanish, walking fashion week, and keeping us all laughing with her incredibly dry and judgmental sense of humor. She had a spark that lit the world on fire, and the world will forever be a better place because of her. Peyton’s determination, grit, and strength throughout her long-term fight with cancer was awe inspiring. She lived and fought more in the last 5 years than most people in a lifetime, and this legacy will be carried on for generations to come. Her light will never be extinguished. Peyton requested that any giving be made to Gynecologic Oncology at the University of Colorado Anschutz Medical Center, in honor of Peyton Linafelter. The link is https://giving.cu.edu/fund/peyton-linafelter-honorary-fund A Celebration of Life will be held in the Summer of 2021.

Peyton Aurora Linafelter was born on April 28th, 2000 and in the early hours of November 24th, 2020, left this earth as quietly and peaceful as the snowflakes that were falling out of the sky. Peyton is survived by her Mother Tera Lynn Gharrity,... View Obituary & Service Information

The family of Peyton Aurora Linafelter created this Life Tributes page to make it easy to share your memories.

Send flowers to the Linafelter family.