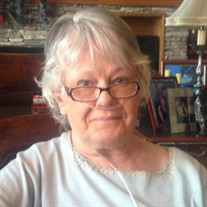 Norma Jo Ehler, age 84, passed away peacefully, on Friday, September 10, 2021, at Shalom Park Nursing Center, in Aurora, Colorado. She was born July 30, 1937, in Johnstown, Colorado to Adam and Molly Helzer. Norma was a 1955 graduate of Johnstown High School. After graduating high school, Norma moved to Fort Collins, Colorado and accepted a job at Colorado State University in the Student Union. There she met her husband of nearly 63 years, Gilford Ehler. Gilford enlisted in the Navy and served in the Korean War. Upon returning to the States, Gilford received his Degree in Design Engineering from Colorado State University. In June of 1958, they were married on the CSU campus at Danforth Chapel. After marriage, Gil and Norma settled down in Wheat Ridge, Colorado. There, they enjoyed suburban life for almost 50 years. They raised three girls and became dedicated members of Wheat Ridge UCC church. In retirement, they moved to Heather Gardens in Aurora, Colorado to downsize and enjoy a few of the finer things in life. As Norma’s health declined, Gil was her primary caregiver. Over the years, Norma took immense pride in her role as mother. There was nothing she wouldn’t do for her three girls; meals, clothes, homework, taxi to and from school and sporting events. In the more recent years, she very much enjoyed the company of her five grandchildren. She has been remembered by family and friends as being so sweet and kind, one of the nicest people! Norma is preceded in death by her husband Gilford, and her parents, Adam and Molly Helzer. Norma is survived by her sister MaryAnn Abrams of Fort Collins, Colorado, her daughter Tamara and son-in-law David Davis of Houston, TX, her daughter Teresa and son-in-law Wayne Bennington of Castle Rock, CO, and her daughter Kathy Ehler of Highlands Ranch, CO. Also survived by 5 grandchildren, Lauren, Joel, Jaret, Mitchell and Adam, and two great-grandchildren, Cade and Carley. Norma will be interred on Friday, October 1, 2021, and will join Gilford in their final resting place at Fort Logan National Cemetery, in Denver, Colorado. In lieu of flowers, please consider donating a LEGACY GIFT in memory of Norma Ehler to: Shalom Park, 14800 East Belleview Drive, Aurora, CO 80015 where Norma spent over three years receiving the utmost care. Visit www.shalompark.org to donate online.

Norma Jo Ehler, age 84, passed away peacefully, on Friday, September 10, 2021, at Shalom Park Nursing Center, in Aurora, Colorado. She was born July 30, 1937, in Johnstown, Colorado to Adam and Molly Helzer. Norma was a 1955 graduate of Johnstown... View Obituary & Service Information

The family of Norma Jo Ehler created this Life Tributes page to make it easy to share your memories.

Send flowers to the Ehler family.