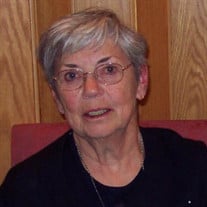 Norma Jean Bennigsdorf was born on March 8, 1933 in Pender, Nebraska and passed away on May 13, 2021 at Castle Rock Hospital in Castle Rock, CO. Norma Jean spent her early years in Pender, Nebraska, and was actually born at the Thurston County Courthouse. The family resided in the basement of the courthouse in Pender, Nebraska which also housed the county jail. Her father, Ray Elliot was the sheriff of Thurston county for many years. Her mother, Lillie Mae Elliot was also the deputy sheriff and jailhouse cook. The inmates loved Lillie as she was known as the best book in Pender. Norma Jean moved to Onawa, Iowa when she was a teenager, and graduated from Onawa High School in 1951. In 1950 she met her future husband Ervin (Benny) Bennigsdorf on a blind date. They married on August 12, 1951 at St. Matthew Church in Mapleton, Iowa. Norma Jean and Benny lived and worked on the family farm in Mapleton, Iowa. In 1956 they decided to sell the farm and move to Colorado Springs, CO. They lived in Colorado Springs until 2002 when they decided to move to Littleton, CO to be closer to their children and grandchildren. They were married 51 years before Benny passed away in 2003. Norma Jean moved to Castle Rock, CO in April of this year. Norma is preceded in death by her parents, Lillie Mae and Ray Elliot. Her husband Ervin (Benny) Bennigsdorf, granddaughter Keri Marie Hanley and her siblings, John Elliot, Orville, Verla Mae Elliot and James Elliot. She is survived by her four children, Scott Bennigsdorf, Carleen (Rich) Hanley, Colleen (Tom) Lutes and Tracy (Kelly) Bennigsdorf, 12 grandchildren and 16 great-grandchildren. If you would like to make a donation in Mom’s name, we have chosen Hearing Charities of America. As many of you know, Mom was completely deaf when she did not have her hearing aid and Cochlear implant on. She often said that she could not even hear herself talk without them. htts://hearingcharities.org/contact/

The family of Norma Jean Bennigsdorf created this Life Tributes page to make it easy to share your memories.

Norma Jean Bennigsdorf was born on March 8, 1933 in Pender, Nebraska...

Send flowers to the Bennigsdorf family.