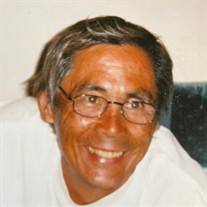 Norm Yabe passed away peacefully on May 3, 2022 in Castle Rock, CO. He spent his remaining days with his 3 loving daughters Kristine, Carolyn, Susan and his sister Arlene all able to be by his side. Norm was born September 9, 1937 in San Francisco, CA. At age 5, his father Kenshiro, mother Fumi and older brother Kenji were evacuated to Camp Topaz located in Delta, UT, an internment camp for Japanese Americans during WWII. They were officially released in 1943 and eventually settled in Denver, CO. Norm attended East High School in Denver where he met and eventually married his high school sweetheart, Jo Moore. Athletically inclined, he earned a swimming scholarship and attended Denver University. While raising his 3 young daughters and working part time, he graduated with a master’s degree in Mathematics. Norm landed a job and worked for the US Federal Government, Bureau of Mines for 25 years. Norm was simple in nature, patient, steadfast, a man of few words but when he had something to say, you never questioned his passion. He was a devoted Frank Sinatra fan, avid sports fan and enjoyed eating food with the appetite of a teenager. He loved living in the Washington Park community and swimming laps or participating in group exercise classes were his favorite past time at the Community Center which became his 2nd home. Norm embraced the Colorado outdoor lifestyle and its sports-town atmosphere to the highest degree. The Denver Broncos were the center of his universe and was a season ticket holder for many years. He was an avid skier, swimmer, runner, cycler and enjoyed fishing in the many beautiful Colorado rivers and streams. One example of his passions was bike touring: Ride the Rockies and Colorado Rocky Mountain Bike Tour. For 15 consecutive years, he trained for and completed a week-long tour, riding up mountain passes ranging from 8-14,000 feet! Who does this? To prepare for these extreme Tour de France-like endeavors, he would do interval training (2x) up Lookout Mountain in Golden, CO. He joyfully kept a detailed journal of all his split times in his exquisite beautiful hand writing. His last tour was 2016 at the age of 77. Norm was a great man and loved by all those who knew him. His legacy will continue through his many nieces, nephews, grandchildren and great grandchildren. The family will host a celebration of life and open house: Saturday, May 21, 2022 650 S. Vine Street Denver, CO 80209 2:00 pm Contact: Suz Yabe 720-561-9977 [email protected]

Norm Yabe passed away peacefully on May 3, 2022 in Castle Rock, CO. He spent his remaining days with his 3 loving daughters Kristine, Carolyn, Susan and his sister Arlene all able to be by his side. Norm was born September 9, 1937 in San Francisco,... View Obituary & Service Information

The family of Norimasa Norman Yabe created this Life Tributes page to make it easy to share your memories.

Send flowers to the Yabe family.