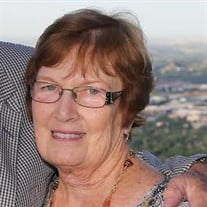 Nancy Field (Chapman) Kercher of Centennial, Colorado was called to be with the Lord on July 29th, 2015. Nancy was born in Philadelphia on March 28, 1941 to James and Carol Chapman (deceased). She graduated from Haverford High School in 1959, and then from Johns Hopkins University in 1962, earning a degree in nursing. She moved out west to Colorado soon after where she met her best friend, Warren, who she married on August 21, 1965. Just two evenings before her passing, she and Warren celebrated what was to be their 50th-year anniversary (a few weeks early) by taking their sons, daughter-in-laws, and older grandchildren out for a magical evening in Boulder filled with laughter and stories. Little did the family know that this was not just a celebration of 50 years of love and marriage between Nancy and Warren, but the capstone and final celebration of Nancy’s life. Nancy is survived by her husband, Warren, her older brother James Chapman, her five sons and their wives and children: Todd and Kristen and their daughters Camryn, McKenna, and Emmy; Tim and Allison and their daughters Ani and Ketevan and son Keats; Joey and Devyn and their daughter Hadley; Shawn and Beth and their daughter Chloe; and Kelly and Annie. Nancy leaves a legacy to her family and friends of a life lived for others: she worked over 50 years in the nursing profession, 47 of those years at Swedish Medical Center. Her gentle, selfless nature made her a wonderful nurse, co-worker, and friend to those whose lives she touched. If anything defined her life—and will stay alive in those who survive her—it was her steady, uncomplaining nature, her deep and abiding faith in God, and her devotion to her family and friends that was best characterized by an unconditional love. In 1981, after already having two sons (ten and twelve at the time), Nancy and Warren were trying to have a third child, or, more specifically, a girl. Things did not work out as planned. An ultra-sound revealed that she was carrying triplets, but this was before the sex could be determined. There was still hope—in fact, a great chance—that one of these babies would be a girl. It was not to be: on April 18th, 1981, Nancy gave birth to red-headed, identical triplet boys. To some, such a life change, especially at her age at the time—39—going from two sons to five overnight would have been a burden. To Nancy, it was a blessing, and she lived out the rest of her life being the best mother all five boys could ever dream of having. To her sons, their spouses, and to her grandchildren, she was their biggest fan, a listening ear and sounding board, a best friend, a steady spirit, an eternal optimist who only saw the best in them, a doting mother and grandmother with a genuine servant’s heart—in short, the glue that kept the family together. Since 1980, Nancy and Warren have had a home in Ouray, Colorado, a place close to Nancy’s heart where she cherished spending time with family and friends. Nancy’s life and legacy will be celebrated at 11:00 am on Wednesday, August 5th at Cherry Creek Presbyterian Church, 10150 E Belleview Ave, Greenwood Village, CO 80111. A light luncheon will be served after the service. The family asks that in lieu of flowers and gifts, please make donations in Nancy’s name to Cherry Creek Presbyterian’s Crisis and Caring Ministries (c/o Barb Roberts, 10150 E Belleview Ave, Greenwood Village, CO 80111).

Nancy Field (Chapman) Kercher of Centennial, Colorado was called to be with the Lord on July 29th, 2015. Nancy was born in Philadelphia on March 28, 1941 to James and Carol Chapman (deceased). She graduated from Haverford High School in 1959,... View Obituary & Service Information

The family of Nancy F. Kercher created this Life Tributes page to make it easy to share your memories.

Send flowers to the Kercher family.